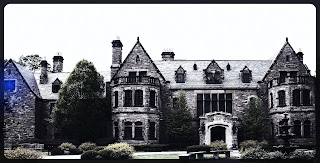 Today's post is about magical places, starting with one from the Legacy of Androva series, and moving onto three of my favourites created by other authors.

Mabre House, Androva
The first picture shows how I imagine Mabre House to look. This is where Shannon first sets foot on Androva. The friendliest rooms in the house belong to Jax and his mother Arianna, although hers is not revealed until the third book. On the far left is the training room, stretching the height of the house. The interior is covered with a blue Protection Spell. It ensures that the magicians inside remain unharmed, no matter what dangerous spell they might be experimenting with. The Protection Spell glows brighter if it's being used. When it's visible from the outside like this, there are probably Combat Spells, or Paradox Spells, or a game of Time Trial happening inside! 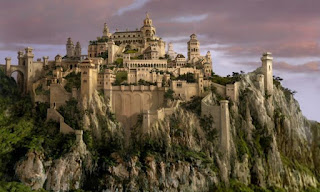 Cair Paravel, Narnia
Almost the best thing about this castle is that C.S. Lewis does not give away too much in the way of description, leaving the reader to fill in the details. But it's by the sea, with a great hall, and thrones, and peacock feathers on one wall, and open doors to the horizon on the other...  It certainly caught my imagination when I first read it! I also think the makers of The Lion, the Witch and the Wardrobe did a pretty amazing job creating the castle for the 2005 film. 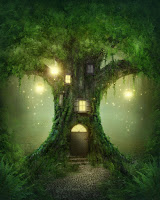 The Faraway Tree
I've never forgotten Enid Blyton's Faraway Tree books, even though I discovered them back when I was only seven years old. The idea of a tree inhabited by quirky creatures and talking animals was intriguing enough, but there was also a different magical land at the top every day. My favourites included the Land of Take-What-You-Want and the Land of Birthdays. There was even a spiralling slide in the middle of the tree to save you from having to climb back down it! 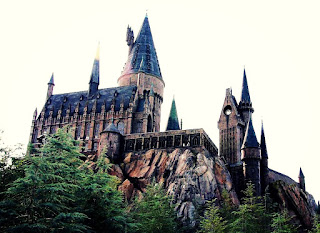 Hogwarts
No list of magical places would be complete without including a creation of J.K. Rowling's. Her world building is absolutely incredible. The only difficulty is choosing just one! Diagon Alley, The Ministry of Magic, The Burrow, Hogsmeade... At one point when I was writing this post, I even considered Newt Scamander's suitcase ☺
But in the end, I had to settle on Hogwarts. Although the prospect of going back to school would normally give me nightmares, I would definitely make an exception for Hogwarts!

Do you have a favourite magical place? Is it one you've come across recently, or one from a book you discovered when you were younger? Thank you for reading!