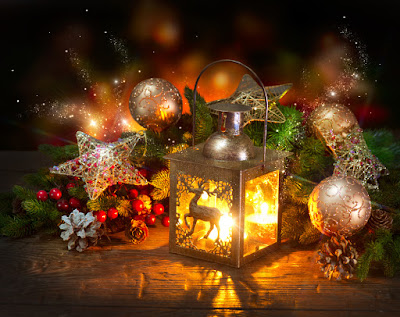 Today's blog post is a new short story, set at the end of Seeking Magic, the third book in the series. That book just happened to finish right around Christmas time, so adding a couple of extra scenes seemed like too good an opportunity to miss 😊

I hope you enjoy it and thank you for visiting my blog today!

“I’ve been thinking,” said Jax, getting up from the sofa and walking to the window. He looked out at the street, where sparkling lights were visible in nearly every house. “This Christmas they have on Terra—it’s a pretty big deal, isn’t it? Much bigger than our Winter Festival.”
He looked over his shoulder at Darius, who smiled. “You just noticed? I think it’s nice. There are no magicians here, but they still believe in magic.”
Jax faced the window again. His green eyes flickered, reflecting the red-and-white Santa Claus on the front lawn of the house next door. “I didn’t just notice. I had to be an elf in that primary school play, thank you very much. I’ll be having nightmares about it for a while yet.”
Darius laughed. “You deserved it. And Terran technology certainly has its uses. I’ll cherish those images forever.”
“That’s what you think.”
“You didn’t.” Darius reached into his pocket. “I knew I shouldn’t have given you my phone to look after during that Combat lesson. Some friend you are.”
“I’m a good friend,” Jax protested. “I got rid of something that would only have caused us to argue in the future.”
“Yeah, well, what about the argument we’re about to have right now? I’ll just ask Shannon to resend them to me, anyway.”
Jax turned back and gave Darius a rather smug smile.
“You did not mess with Shannon’s phone,” said Darius, raising his eyebrows. “She’ll be so mad. And her magic is still way stronger than yours, or did you forget that?”
“She deleted them herself. She asked me what I wanted as a Christmas present, and I told her I wanted those elf photos to disappear.” He shook his head. “Unfortunately, she also said the whole thing was engraved on her memory anyway, and she reserved the right to laugh about it whenever she wanted… but at least no one else can.”
“Well, whatever deal you made with Shannon, I’m still annoyed with you,” said Darius.
Jax crossed the room and sat down again. “So, I wanted to ask for your help with something.”
Darius sighed with exasperation. “Did you not hear what I just said?”
“I’m sorry. What can I say? I was desperate.”
“Fine,” said Darius. “I accept your apology. But you have to be a test subject for my Research Spell next week. Agreed?”
“I don’t know. What exactly is in your Dream Remedy, again?”
“I’m remaking it. I’m thinking elves. Lots of elves. With black hair and green eyes.” He laughed at the look on Jax’s face. “What did you want my help with?” Darius asked, when he’d managed to get his amusement under control.
“It’s about this Christmas thing. Shannon doesn’t want a big present or anything. She says after all the drama recently with the time travel, and Penny becoming a magician, that she’s happy if we just spend the day together, but I think she deserves something amazing. Only, I don’t know exactly what…”
Darius leaned forwards. “Yes! I was thinking the same about Penny. She says being a magician is enough for all the Christmases and birthdays she’ll ever have, but I disagree. I want to make sure she never forgets our first Christmas,” he added, his cheeks going a bit red.
“Right,” said Jax, giving Darius an understanding grin.
“What shall we do, then?” Darius looked at the time on his phone. “They’ll be back from helping Mrs. Blackwood soon, so we’d better talk fast.”
“The problem,” said Jax, “is that we don’t have any Terran money, and we can’t use a spell in front of Shannon’s sister or Penny’s family.” He made a face. “Magic isn’t exactly discreet.”
“Wow. Jax following the rules and not showing off either. It must be love,” joked Darius.
“Shut up,” said Jax. It was his turn to blush. Annoyed, he filled his palms with an Ice Spell and pressed them against his cheeks for a second. As he lowered his hands, he gave them a thoughtful look. “Although… there might be a spell we can use. I’ve just had an idea.”
“Tell me,” said Darius, and Jax explained.


On Christmas morning, Shannon woke up slowly to the sound of her younger sister’s excited giggling. “He’s been, Shannon, he’s been!” she shouted. “Come downstairs and see what Santa Claus brought you. And you won’t believe what else has happened!”
“In a minute, Tammy,” she called back, stifling a yawn. She turned her head into the pillow, smiling as she remembered the evening before.
Shannon had spent Christmas Eve on Androva with Jax, Darius, and Penny. She, Jax, and Darius had taken turns using Manipulation Spells to create ever more extravagant Christmas-themed food, drink, and decorations, while Penny used her brand-new force field to draw snowflakes in the air. By the time Revus, Jax’s father, returned home, the usually sombre Mabre House kitchen looked more like a Santa’s Grotto in a department store.
Revus’s face had been mixture of horror and disbelief, though he had done his best to muster a polite smile for Shannon’s and Penny’s benefit. He’d immediately turned around and said he had some urgent paperwork to see to in his office, and he’d barely closed the kitchen door behind him when the four friends broke into helpless giggling. By the time Jax and Darius took her and Penny through the portal and back home, it had been quite late.
Jax and Darius were coming to Terra for Christmas dinner, which Shannon’s parents were hosting for both families later that day. Shannon knew Penny would want to arrive early to practice using her force field some more in the privacy of Shannon’s bedroom. Though Penny was excited about joining the Seminary of Magic in the New Year, she was nervous about being able to keep up with the lessons.
Shannon was just about to push back the covers when her phone chimed with a text. “Are you awake?” it said.
“Yes. Just.”
“Look outside,” came the reply.
Shannon got out of bed and walked to the window. When she moved the curtain to one side, she gasped. Snow! There was snow all over her garden. It was perfect, like the white Christmas of her dreams. As she watched, a figure dressed all in black stepped out from under the chestnut tree at the edge of the garden. Jax looked up at her and grinned, before glancing down at his phone and typing quickly. “Happy Christmas, Shannon. x,” said his text.
Shannon pointed to Jax and then the garden with an incredulous look. “You?” she typed.
He nodded and wrote a reply. “Me and Darius. The snow goes all the way to Penny’s house. Thank Androva she doesn’t live far!”
“I love it. It’s the best present I’ve ever had. xxx”
Jax’s grin got bigger. “I’ll be back for those kisses in person later.”
Shannon watched him leave, her own smile wide enough to make her cheeks ache. Penny was going to be so happy when she saw the snow. She had a feeling this was going to be the best Christmas ever.