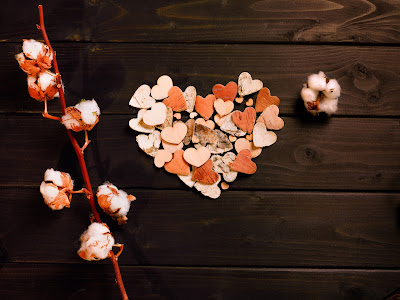 This post is a little bit late, but I decided I couldn't exactly wait another year for Valentine's Day to come around again 😍

It's intended to be a feel-good story for anyone who likes the Legacy of Androva characters. It follows on from the Christmas short story I wrote at the end of December (you can click on the Short Story label at the top of the post if you're interested in reading that one). I figured it would be fun to add a bit more content to the gap between the end of Seeking Magic and the beginning of Controlling Magic.

I hope you enjoy the story, and thank you for visiting my blog today!

“You know what day it is tomorrow, right?”
Shannon stopped climbing and looked over her shoulder. She and Penny were halfway up the winding staircase leading from the Seminary of Magic’s portal room. It was a cold Friday morning in February and Shannon couldn’t wait to get to the warmth of the main building. They’d arrived early for one of Penny’s catch-up lessons. She wasn’t brave enough to open a portal on her own yet and Shannon or Darius usually accompanied her.
“Of course. It’s Saturday,” Shannon replied.
“And? Have you made any plans?”
Shannon pushed her hands into the pockets of her jacket and shivered. “I’m staying at Mabre House tonight so Jax and I can work on his Immobility Spell in the morning. For that Combat test next week.”
“He’ll never beat you, though. Not unless you let him.” Penny raised her eyebrows.
“I know that. And he knows I wouldn’t. But he’s determined to be second and it’s pretty close between him and Darius at the moment.” Shannon pushed her chin into her scarf. “Can we start walking again? I’m freezing my face off here.”
“That’s it? That’s your only plan for tomorrow? To study Combat. In a training room.” Penny gave an exasperated sigh.
“What are you huffing about?” asked Shannon.
“It’s February 14th tomorrow.”
“It’s… oh,” said Shannon.
“Yes. Oh. I’ve been waiting for a chance to ask you all week, but you’re always with Jax, or I’m with Darius, or something, and now it’s Friday and I was counting on you to have it all worked out…”
“Why would I have it all worked out?” protested Shannon.
“Because you’ve been with Jax for nearly a year. And it’s Valentine’s Day! Come on, Shannon. We always said if we ever both had boyfriends we’d do something together.”
“Yeah, well…” Shannon lowered her gaze, feeling guilty that she’d forgotten all about it. “We never expected our boyfriends to be magicians from a whole other world, though. They’re hardly going to be impressed by a piece of folded cardboard with a love heart on it.”
“No. But I seriously hope that’s not your best idea,” replied Penny.
“I can’t think straight when I’m this cold. Besides, you’re the creative one,” said Shannon.
“I’m also the one who’s only been learning about magic for two months,” said Penny.
“OK. OK.” Shannon turned to climb the remaining stairs. “I’ll try to come up with something later. Maybe during History. I’ll sit at the back.”
“You are History,” said Penny. “You and Jax rewrote it when you faced Angelus.” The two girls reached the door at the top and entered the black stone corridor. A purple-and-silver Fire Spell swirling against the high ceiling meant the temperature was significantly warmer than in the underground portal room. Shannon took off her scarf. “I’m sure Professor Dyttan would be delighted to hear you casually dismissing the other eight thousand years on his syllabus,” she said.
Penny grinned. “Some of his stuff’s all right. The Sygnus Wars, for example.”
“Only because you want a Sygnus and you like drawing them. Come on, you should go. Professor Ashton will be waiting for you.”
“Where will you be?” asked Penny.
“I’m having breakfast with Jax. We’ll wait for you in the Seminary café.”


“If you don’t stop staring at my mouth, I won’t be responsible for my actions,” said Jax, half an hour later.
“I’m not… I wasn’t…” Shannon gave up, feeling her cheeks get hotter with every second that passed. Jax’s green eyes were full of laughter. Flustered, she dropped her gaze to his mouth again, and it opened in a wide grin. “Right,” he said, pushing his chair back. “You brought this on yourself.”
Shannon, half embarrassed and half laughing, made a poor attempt to run away from her side of the table before Jax caught hold of her hand and pulled her gently to a stop. He glanced left and right, but it was early enough that the café was still mostly empty. “Unless you tell me not to, I’m going to kiss you good morning now,” he said.
“Yes,” said Shannon, leaning in.
“You,” he said, in between kisses, “are… the… worst… kind of… Distraction Spell… going.” He squeezed her hand. “Or the best. Depending on how you look at it.”
“The best,” she said.
“Yeah. But if you look at me like that during a Combat lesson I’m going to report you for unfair tactics,” he joked.
“Like I need any help beating you in Combat,” said Shannon.
“Maybe not. But you can still help me beat Darius. Are we OK for that practice session tomorrow?”
“Of course.” Grateful for the change of subject, Shannon listened as Jax described a new technique he wanted to try. I’m going to kill Penny, she thought. Ever since she mentioned what we should do for Valentine’s Day, all I’ve been able to think about is kissing.
Watching Jax push his black hair off his forehead in a characteristically impatient gesture, Shannon admitted to herself that her boyfriend was very kissable. She smiled.
“What?” he asked.
“Nothing. I’ll tell you tomorrow. Hopefully.”
“Tell me what?”
“I don’t know yet. Look, there’s Penny. She’s smiling. Maybe she finally managed to make a Portal Remedy.”


“What do you mean, you don’t have any ideas?” said Penny.
“I mean I don’t have any ideas.” Shannon folded her arms defensively. “I’m sorry. I’m rubbish at this.”
“I can’t believe you’ve got nothing. We’re almost out of time.”
“Maybe we should forget about it. It’s not like they even know what Valentine’s Day is,” said Shannon. “And we’re not… I mean… we’re not going to say the L word or anything, are we?”
“No, definitely not,” said Penny. “Way too soon. But after what they did at Christmas, I just wanted…” She trailed off and shrugged.
“I know,” said Shannon sympathetically. “I feel the same, but Jax and Darius have been learning about magic since they were born. The chances of us being able to come up with something to surprise them are pretty remote.”
Penny frowned. “Maybe we’re coming at this from the wrong angle. Maybe we shouldn’t be concentrating on magic at all.”
“What do you mean?”
“Well… what about Terra? I mean, Earth.”
“What about it?” asked Shannon.
“We could open a portal to anywhere. Couldn’t we? Um… I don’t know… How do you think Jax would like to make a Solo Transference-assisted dive across the Grand Canyon? Or off the top of a pyramid?”
Shannon’s expression was a mixture of fear and excitement. “He’d love it. But it’s so dangerous. And we’d be breaking so many rules.” She made a face. “Which Jax would also love.”
Penny grinned. “We’d need to find a place with a lot less people. But if you’re OK with the basic idea of it, let’s start looking for somewhere to go.”


Jax and Shannon had just finished their last Combat duel the following morning when there was a knock at the training room door.
“Yeah, come in,” said Jax, raising his voice.
Penny put her head round the door. “Are you ready?” she said, looking at Shannon.
“Ready for what?” asked Jax.
“I have no idea,” said Darius, appearing behind Penny. “She won’t tell me anything and this bag’s really heavy.”
“Shannon?” said Jax.
“We’re going out for lunch,” said Shannon. “How do you feel about a picnic?”
Jax exchanged a bemused glance with Darius before turning back to Shannon. “You have noticed it’s freezing outside?”
“We’ll see,” said Shannon, taking hold of his hand. She and Penny refused to answer any questions until all four of them were standing in the Mabre House portal room. Getting out her phone, Shannon painstakingly entered some new coordinates on to the wall. The symbols flickered in the low light, waiting to be activated.
“Today,” said Penny, “is 14th February. Where Shannon and I come from, it’s called Valentine’s Day.”
“Who’s Valentine?” asked Darius. “Someone famous?”
“Kind of. It’s more what he stands for. It’s a day for people who are in l—” She bit off the word before she could say it. “A day for people going out with each other to do something nice. Together.”
“Like what?” said Jax.
“Well… you saw Christmas, right? It’s a bit like that but for couples and on a smaller scale. Cards, presents, maybe a special dinner…”
“But I haven’t… I didn’t….” Darius looked at Jax. “Did you know anything about this?”
“Of course not. You just heard me ask, didn’t you?”
“Calm down, we weren’t expecting you to know,” said Penny. “This is our chance to say thank you for the snow.”
“What are you going to do?” said Jax, looking at the coordinates. “Where is that?”
“We’ll each need a basic Protection Spell. It’s a little more exotic than England,” said Shannon. “But it will be warm. It’s the dry season so there are hardly any tourists. Penny and I got up at the crack of dawn this morning to open a practice portal from David’s house. The time difference works in our favour and there’s no one around.”
“Yeah, the river’s not deep enough for the boats at this time of year,” added Penny. “And the waterfall’s less fierce, but we figured that’s a good thing. Jax and Darius can still break their records for the longest dive, but hopefully we’ll all survive the experience.” She smiled.
“What are you talking about?” said Jax.
“It would be easier to show you,” said Shannon. She activated the portal with one glowing hand. The shimmering doorway rose up obediently from the spellstation. “Angel Falls,” said Shannon, stepping through.

💖    💖    💖
Darius ate another piece of chocolate. Penny had made sure to pack plenty, knowing it was her boyfriend’s favourite Terran food. All four underage magicians had fallen on the picnic as if they were starving after the adrenaline rush of travelling up and down the world’s tallest waterfall using only their force fields. Jax, Shannon, and Darius had taken turns to help Penny, whose magic hadn’t reached its full strength yet.
“Darius?” asked Jax.
“Hmmm?” replied his friend. Darius’s face was lifted towards the sun and his eyes were half-closed.
“I think we need to up our game. They’ve definitely gone one better than the snow.”
“No,” said Shannon, putting her hand on Jax’s arm. “The snow was incredible. All Penny and I did was open a portal.”
“It’s not a competition,” said Penny. She gave Jax a wink. “For once.”
He grinned. “All right. But this is amazing.”
“Happy Valentine’s Day,” said Shannon.
Penny sighed. “I suppose we should be getting back before anyone misses us.”
“Have we got time for a kiss?” said Darius, leaning towards her.
Jax looked at Shannon. “I think that’s a great idea. Surely Valentine’s Day is supposed to involve kissing.”
She nodded. “Yes. Magic, and kissing, and you. My perfect day.”