When I wrote Surviving Magic, the sixth book in the Legacy of Androva series, I did a lot of research in an attempt to make Galen's experience of Ancient Rome as accurate as possible. I mean "accurate" in a broad sense because any available information has been subjected to some kind of interpretation bias, to a lesser or greater degree!

It left me with a few unanswered questions, which I am still wondering about. Although I haven't been able to find any definitive answers, I thought it would be interesting to blog about two of them. 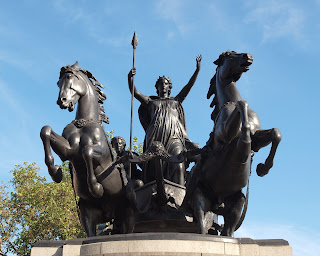 Boudicca's Fate
Boudicca was the Queen of a Celtic tribe in England called the Iceni. She led a rebellion against the invading Roman army, which happened around 60AD. Her problems all began when her husband died. He'd ruled more or less independently of Rome, but on his death, his will was ignored, and his kingdom was seized. Boudicca and her daughters were supposed to have been treated pretty badly (I won't go into the nasty details).

Her uprising was almost successful. Emperor Nero seriously considered removing Roman forces from Britain entirely. Boudicca commanded an army 100,000-strong and she destroyed three major cities: Camulodunum, Londinium and Verulamium, killing 80,000 Romans and Britons in the process. She was supposed to have left no one alive, burning the cities to make sure of it. Archaeologists found a layer of black ash beneath the modern-day Verulamium which validates this report. However, despite being massively outnumbered (perhaps by as many as twenty to one), the Romans won the final battle, due to a combination of superior strategy, weapons, and discipline.

This is the point at which accounts differ. We are reliant on Roman historians for our knowledge of the entire uprising and, of course, victors are not necessarily the most reliable narrators! The two main sources disagree. Boudicca was said to have either killed herself in shame, or died of an illness and been given a lavish burial. Those two outcomes are pretty different, don't you think? I was curious enough about the whole thing to invent a fictional account of Boudicca for book six, with a magical slant to the story. 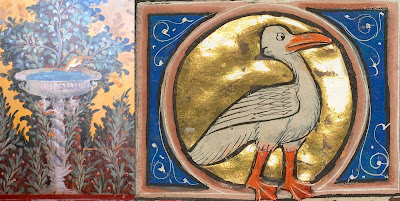 Art: Ancient Rome versus Medieval
Although I didn't spend too much time describing the surroundings of Pompeii and Rome, I did refer to the colours and frescoes (wall paintings) in both Seeking Magic and Surviving Magic. I looked at examples of what had been excavated from Pompeii's ruins and other art from the same time period and I thought it was pretty impressive.

On the left is a Roman painting and on the right is a Medieval one. As far as I can tell from my research, there are approximately 1,000 years separating the two. From century to century, in more recent times, art has tended to become more sophisticated. Not in this case, however. And, in my uneducated opinion, the earlier Roman painting is the one that would look better on my wall.

I haven't been able to find out why art changed so much after the fall of the Roman Empire. Was it suppressed? Were the skills simply lost? Some sources say that art stopped being aspirational, because the Romans used their art to show an idealised and beautiful version of the world. Instead, in the so-called Dark Ages, art became quite controlled with strong links to religion.

Have you ever researched a particular time in our history, either for school, writing, or just general interest? Have you been left with any unanswered questions? Thank you for visiting my blog 😊