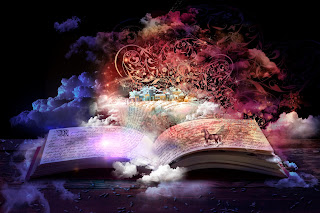 Writing about magic brings a lot of freedom because your imagination gets to dream up whatever it wants. There aren't any rules but the ones the writer creates for themselves. However, mixing the story with a little history along the way can be interesting. I enjoy learning something new about the world, and it's fun to creatively fit the existence of magic with past events. So far I've tried Ancient Rome 🏛 and Tudor England 🏰.

This weekend has been a combination of writing and research. On the research side, I decided my next historical reference would have something to do with the fabled Seven Wonders Of The World. I knew very little about them, and I wanted to change that. Also, they sounded like a good fit for the Light Mage Series and its magically created earthbound dimension. How/when is something I'll figure out later!

Tourism is big business in the twenty-first century. We live on a planet full of incredible sights and spectacles, and these days we can travel pretty much anywhere. Back in the Hellenic Period of Ancient Greece (when the Seven Wonders were first written about), people were equally keen to discover the world around them. The Seven Wonders were the biggest tourist attractions of their day. But the Greeks couldn't travel across the entire planet. Therefore the Seven Wonders were inevitably located quite close together. 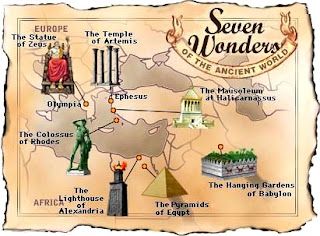 The Hellenic Period is the time between the first democracy in Athens until Alexander the Great's death, which spanned 507-323 BC. Two-and-a-half thousand years ago, more or less. Incredibly, all Seven Wonders only coexisted for less than sixty years. That's not very long!

Here are a few facts from my research. This is definitely not an exhaustive guide to the Seven Wonders--it's just some information I found surprising and/or interesting as I learned about them. The amazing thing is that they were all man-made in a time where there was no mechanisation, no electricity, and no computers. Everything from the design to the construction was manual. 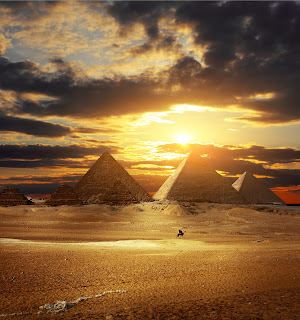 The pyramid was built two thousand years before the others (~2,500 BC) and is the only one of the Seven Wonders still standing today. Therefore it's also unique in having a real photograph! Historians think the pyramid was made as a tomb for the Fourth Dynasty Egyptian pharaoh Khufu. There are three chambers inside it: a burial chamber, a statues chamber, and a mysteriously unfinished "underworld" chamber.

The pyramid is huge, weighing six million tonnes and stretching to 450 feet at its highest point. That's almost half as tall as the Chrysler Building in New York. It was made from 2.3 million blocks of stone. Some of the stones were transported from 500 miles away, which is an unimaginable distance. You'd travel almost half a mile if you walked all the way around its base. No one knows exactly how it was built--because it seems impossible!--though there are many theories about likely construction techniques. 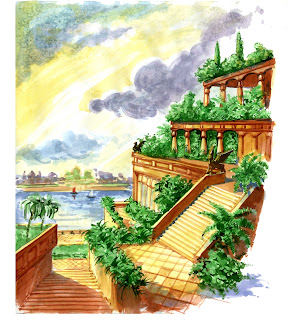 Creating a garden purely for it to look beautiful (as distinct from the production of food) became increasingly popular amongst wealthy private individuals in the Hellenic Period. Flowers, water features, sculptures, and architectural design were all important. The more original the better. The Hanging Gardens were apparently built ~600 BC by the Babylonian Empire's greatest king, Nebuchadnezzar II. This is the only one of the Seven Wonders whose existence is disputed. Evidence of the gardens has never been found, although they were said to have lasted for 1,500 years.

It would have been quite a feat to irrigate the many terraces in such a climate. The sight of such an extravagant and exotic garden would probably have impressed Greek tourists enormously, being so different to the dusty olive groves they were more accustomed to. 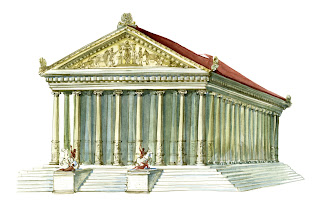 Temple of Artemis at Ephesus

The most impressive Greek temple that I know about is probably the Parthenon. As it turns out, the Temple of Artemis was actually twice the size of that. It took more than one hundred years to build. I can't imagine a marble temple on such a a scale. It's similar in length and width to a US football field!

Artemis was the Greek goddess of hunting, forest animals, and fertility. Her temple was rebuilt more than once in its long history. Originally constructed around 550 BC, it was the victim of a deliberate arson attack two hundred years later. Then it was destroyed by a Gothic invasion in the third century. Finally, the temple was closed during the rise of Christianity at the start of the fifth century. The ruins remain a tourist attraction today. 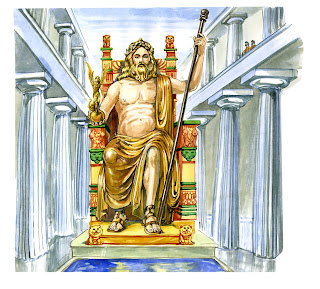 Statue of Zeus at Olympia

The Statue of Zeus was forty feet high. That's almost seven times as high as the average person. It was rendered in full colour too, with a wooden frame underneath and ivory (for the skin) and gold (for the hair/beard/clothes) on top. Details were created from silver, copper, enamel, glass, and jewels. No wonder it became so famous.

It would have gleamed too. Apparently the statue was painted with olive oil to protect the ivory. The oil was kept in a pool in front of the statue on black tiles, creating a reflection that made the statue look twice its size. As if it wasn't impressive enough already!

Built around 450 BC, the statue lasted for a thousand years before being destroyed by fire sometime in the fifth or six century. 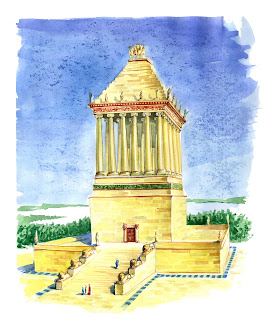 The word mausoleum (meaning a tomb above ground / funeral monument) originates from this Seventh Wonder. It was built for Mausolus, the ruler of Caria, around 350 BC. Mausolus himself started planning and building this monument fourteen years before he died. It was completed after his death by his wife--and sister!--Artemisia. He wanted to commemorate his dynasty and the city he'd created.

It wasn't only the structure that was so impressive (it was nearly twice as high as Buckingham Palace) but also the accompanying colour statues. There were lions on the staircase. Gods and goddesses around the platform. Warriors on horseback at each corner. And, of course, Mausolus and his queen. On the roof was a massive statue of Mausolus riding a chariot. The monument lasted a long time. It was weakened and finally destroyed by a series of earthquakes from the twelfth to fifteen centuries. 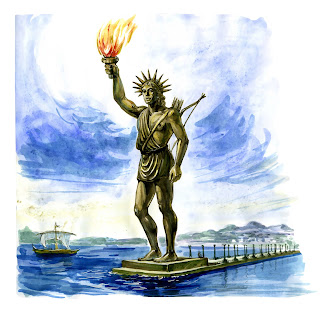 This statue was even taller than the Statue of Zeus. One hundred and ten feet high. That's twice as high as the letters in the Hollywood sign. It was intended to look like the Greek sun-god Helios and was built at the entrance to Rhodes (which had five harbours) to celebrate a victory over Cyprus around 300 BC. Unfortunately, the statue didn't even last a full century before an earthquake destroyed it.

The broken pieces of the statue remained in the harbour for a thousand years before they were finally melted down as scrap in the mid-seventh century. 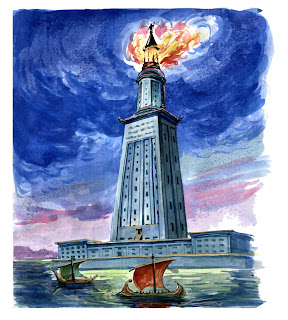 Height was definitely a common theme amongst the Seven Wonders! The lighthouse was more than 330 feet high. To put it into context, that means it was twenty-five feet taller than the Statue of Liberty including the pedestal.

Alexandria was a city founded by Alexander the Great in 331 BC. It had two natural harbours on the River Nile and quickly became a successful trading port. Ptolemy I commissioned the lighthouse in 300 BC, though it was finally completed by his son (Ptolemy II!) twenty years later. It stood on the island of Pharos, a word that subsequently became part of the Greek language to mean lighthouse. Legend has it that the inhabitants of Pharos were "wreckers" (shipwreck raiders) and so Ptolemy built the lighthouse to keep the ships safe. It used a mirror to reflect the sunlight during daytime and a fire at night, lasting more than 1,600 years until the early fourteenth century.

And that's it--all Seven Wonders Of The World present and correct! I hope you enjoyed reading about the tourist attractions of the past as much as I enjoyed researching them, and thank you very much for visiting my blog today 💕.