A Spooky Reading Selection for Hallowe'en 🎃 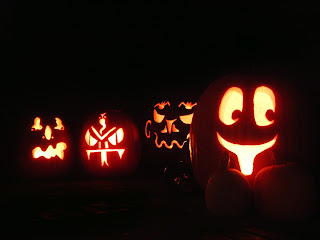 Most of the time my reading choices are based on nothing more scientific than the cover and/or description that catches my eye next. But Hallowe’en is one of the two occasions when that changes. The other is Christmas. This week I’ve been searching for YA books with paranormal content. I tend to shy away from hard-core horror, but I’m more open to a scary story at this time of year!

Here are my three choices: 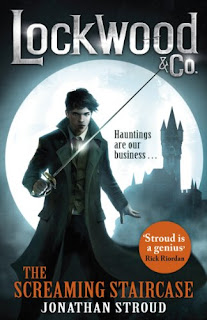 The Tried and Tested
Perhaps this one is cheating because it's a reread. However, some books deserve to be enjoyed more than once, especially when they're as brilliant as the Lockwood & Co. series. These five books by Jonathan Stroud describe the adventures of a psychic investigation agency. The three main characters are teenage ghost hunters, and the phantoms in question are genuinely scary. Definitely no paranormal romance here! But there's a lot of humour, enduring friendship, and a very clever story.

First Line
Of the first few hauntings I investigated with Lockwood & Co. I intend to say little, in part to protect the identity of the victims, in part because of the gruesome nature of the incidents, but mainly because, in a variety of ingenious ways, we succeeded in messing them all up.

Quotes
“Well,” Lockwood said, “if you judge success by the number of enemies you make, that was a highly successful evening.”

“When you go out hunting wicked spirits, it's the simple things that matter most. The silvered point of your rapier flashing in the dark; the iron filings scattered on the floor; the sealed canisters of best Greek Fire, ready as a last resort...”

“This is the way it was with Lockwood, his shifts were sometimes so sudden that they took your breath away. But his energy and enthusiasm were always impossible to resist.” 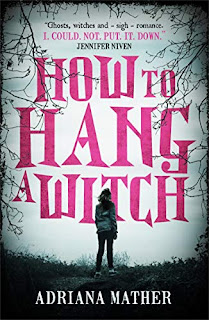 The Highly Recommended
My next choice is new to me although it was published almost a couple of years ago. How to Hang a Witch by Adriana Mather has an overall rating of 4.8 out of 5 stars from more than 900 readers on Amazon.com. That's what I call highly recommended! I was intrigued as soon as I read the description. Sam, the protagonist, has recently moved to Salem. She's unwelcome because she's related to one of the men responsible for the original Salem Witch Trials. She soon finds herself at the centre of a rekindled centuries-old curse. There's an angry (and apparently handsome) ghost in the mix too.

First Lines
Like most fast-talking, opinionated New Yorkers, I have an affinity for sarcasm. At fifteen, though, it's hard to convince anyone that sarcasm's a cultural thing and not a bad attitude.

“You see, 'witch' is merely a title. It is not the title that is inherited bad but the people who decide what that title means.”

“If a man fears dogs, he may beat one with a stick when he sees it. As is the nature of all creatures, that dog will bite him. And then he may tell everyone that he was right about dogs, that they are evil. But I ask you, who is at fault in this scenario, the man or the dog?”

How to Hang a Witch (Amazon US) 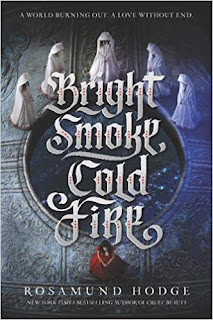 The Wild Card
I wanted to take a chance and surprise myself with my final choice. I landed on this book because it was described as a Romeo and Juliet retelling (and I love Shakespeare). However, the Hallowe'en twist is that it's Romeo and Juliet with magic and zombies. Bright Smoke, Cold Fire by Rosamund Hodge looks like a fascinating take on the classic story, and I can't wait to read it.

First Lines
If he does not come soon, she may not have the heart to kill him. For an hour now, she has sat at the foot of her bed, gripping her sword in its crimson scabbard. Over and over she whispers, I am the sword of the Catresou. I was born to avenge the blood of my people.
But her traitor throat aches and her coward eyes sting. Once upon a time, she believed she was only a sword. Now she fears she is only a girl. She hopes he will come soon. She hopes he will never come.

Quotes
“Stop thinking of her,” Paris snarled, grabbing Romeo’s shoulder and wrenching him back around.
Romeo flinched, his eyes going very wide, and cold horror clutched at Paris. He had ordered Romeo how to think. If it broke his mind—
Then Romeo huffed out a laugh and said, “I can’t. I can’t stop thinking of her.” He smiled. “Your magic isn’t strong enough for that.”

“I am going to live and die for you,” he tells her. “I would like to know your face.”
“You will certainly die, at any rate.”
“And for the past three hours I have lived, so my prophecy is true already.”
She does laugh then; and with a twist of fear in her stomach, she realizes that she is going to say yes.
“You cannot tell anyone,” she says.
“How could I dare to boast of it,” he says, “when you have seen my face as well?”

“I have an idea for that, actually. You two can be the guests, and bring me along as your sacrifice. That way I’ll be in a position to help free the other sacrifices when we make our escape.”

Paris had thought he was used to the horrifying idiocy that came out of Romeo’s mouth, but apparently he was still able to be shocked.

Do you update your TBR list for Hallowe'en? Have you read any of the books I've chosen? I hope you enjoy your next book, and thank you very much for visiting my blog today! 👻