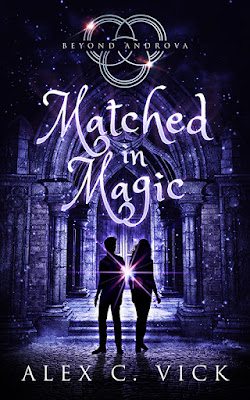 I'm so happy to be able to write these words...

Matched in Magic will be released next month! The first book in the Beyond Androva series has a title, a description, and a beautiful cover 💜. The new series logo is Serena's Sygnus—three overlapping circles—and it replaces the seven-pointed star from the Legacy of Androva that belonged to Jax and Galen.

The story begins a few months after the end of Surviving Magic, and it takes place in a different timeline/world to the one(s) Jax and Shannon live in. Although Beyond Androva is a spin-off series, it can be read independently.

Serena is a sixteen-year-old magician in search of a new life. She doesn’t know what to expect from the world on the other side of the portal, but she’s certain it will be better than what she’s leaving behind.
Art is sixteen too. He’ll never have any magic of his own. His unmatched status forbids it. The threat of mage-sickness on his world means that everyone follows the rules.

The pre-order for the eBook (29th December 2019) will be up on Amazon soon, and I'll update this post with a link when it's available.

Thank you to Kerry at Aero Gallerie for creating another amazing Androva cover, and thank you for visiting my blog today!