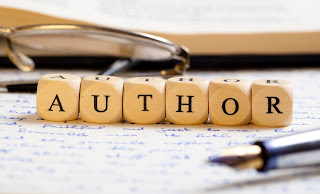 For my final blog post of 2019, I'm very happy to be able to share an interview with my friend and fellow writer, Anke Schönle. Her first book, A Brighter World, has recently been released, and I was lucky enough to be able to read it before everyone else ☺.

A Brighter World is a contemporary novella-length story for adult readers. I've included the description below, but the Look Inside feature on Amazon (here) is a great way to discover the first three chapters for yourself 📖. You can also visit Anke's website for more information about the book including some exclusive bonus content! 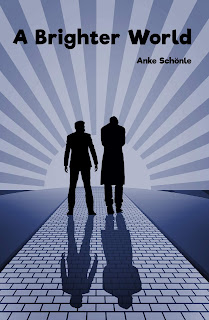 A Brighter World, by Anke Schönle

Benjamin is at the low point of his life when he meets therapist Alexander Senne. Senne tries to help the young man, but then their relationship develops differently than expected.
Interior monologues, dream sequences and flash backs run through the story and lead to the reader often knowing more than the characters.
A story about identity and family, hurt and trust.

And now, on with the interview. I hope you enjoy meeting Anke, and thank you very much for visiting my blog today! 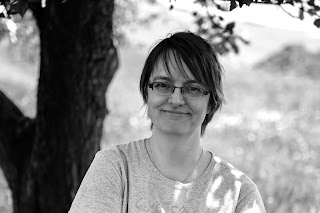 How much of yourself is reflected in this book (for example: professional expertise, personality, or other) and how?

I was recently told Alexander "sounded" like me. Quite a lot of my personality, my family background, the way I grew up went into him, other parts of me are reflected in Benjamin. I used to think that using myself as a foundation for a character was somehow cheating, but in the end we write what we know—from our own experience or from people we meet. There's this great line:
"I'm a writer. Anything you say or do can and will be used in a story", and that's so true. I always carry a notebook...

If you could spend time with a character from your book whom would it be? And what would you do during that day?

Definitely Alexander. I'd shadow him to watch him work with his patients. I considered studying psychology for a while and it still fascinates me. I just hope it wouldn't be one of his migraine days.

How do you hope this book affects its readers?

I hope they can relate to at least one character, feel their pain and share their hope, and find a part of themselves in them. Maybe, just maybe if they had a bad start in life like Benjamin, the book can give them a little hope of things getting brighter. And even Alexander has his own demons that he overcomes with Benjamin's help. Looking at the dark parts of one's life can be painful, but with the right people to lean on I think we can start to heal.

Can you tell us about your cover?

It was designed by my friend Wendy. She's in the UK and I'm in Germany so there was no sitting at a table and discussing drafts—and still we found the final version quite fast. Her first draft matched the picture in my head very well, so it was basically a matter of adjusting colours and details. The idea was that Benjamin starts from a dark point in his life and experiences a better, brighter world once he lets Alexander in, so they walk towards that brighter future side by side.

Sum up your book for Twitter:  280 characters or less.

Oh boy. I love twitter, but being brief isn't my strong suit (unless I'm writing. I'm a lazy writer. Less is more and stuff). How about:
Benjamin meets Alexander at the low point of his life, but when he starts trusting Alexander, things begin to look brighter. A story about hurt and trust, family, identity and overcoming your demons.
Wow that wasn't even 280!

How do you select names for your characters?

I hate that part! Usually it takes me forever (finding titles is just as bad by the way). But the routine I've developed goes something like this:  if character A is based on real life person B, take B's name and change it in at least two stages. For example if the real life person is called Steven, I might go Steven -> Stevie Wonder -> Wanda -> Fish called Wanda -> Jamie Lee Curtis, and the fictional character might end up being called Jamie, Lee or Curtis. Yes, it does take forever! Usually after spending some time with my characters I forget their names' origins. In the case of Ben and Alex I did it for their last names. No, that's not true. Alexander's I just stole directly from a real life person!

How long have you been writing?

The first memory I have of trying to write a book I must have been nine. My mother accused me of plagiarism (absolutely justified) and that was that for quite a while. I wrote my first poem at seven, at fourteen I regularly wrote poems and song lyrics, and in my twenties I discovered fan fiction. I've been writing ever since, but I had to turn forty before I published my first novel.

What do you like to do when you're not writing?

Music has always played a big role in our family, so I learned a few instruments and sang in different choirs. These days it's mostly singing (classical in a big concert choir and pop in a band) and some trumpet. I read, but not as much as I would like to, I spend a lot of time online, I like to travel, I like going to the movies and to the theatre, I paint, I entertain our three cats—oh and to earn a living I'm a speech therapist, which I do like most of the time.

Did you like reading when you were a child?

I loved it. There's a scene in the book where Benjamin describes himself as a young boy, and that's 100% me. I was always reading. I would get a pile of books from the library every week, people would give me books for my birthday and for Christmas—my granddad was a bookseller, and no way would anyone in my family have said no to another book. My aunt had a ton of books and comics that I was allowed to borrow whenever I wanted. I wouldn't go anywhere, not even for one night, without packing at least one book.

Favourite class in high school. Why?

German and English. Those were the intensive courses I chose for my A-levels. It basically meant reading for ten hours a week, and I was reading all the time anyway, so why not read what was on the curriculum and get decent grades for it? Bonus: field excursions to Berlin and London.

What can we look forward to from you in the future?

I have half a dozen ideas, including trying to adapt "Wie einen seine Mutter tröstet" for the stage—just to see if I can do it and because I love theatre. The project I'm spending the most time on at the moment is a story that will most likely be published online as a fan fiction. And I just finished an online writing class with Neil Gaiman that I still have a ton of homework left from.

Bonus question: You’re stranded on a desert island—which character from your book do you want with you? Why?

OMG Ben. It has to be Ben. Why?? Because he's hot! We'd have a great time. It's a tropical island, right? Nice beaches, crystal clear water, no sharks please. On second thought Angie would be very tempting, too. (She’s a side character that doesn’t get a lot of screen time but boy do I remember the woman she’s based on!) Can I have them both?