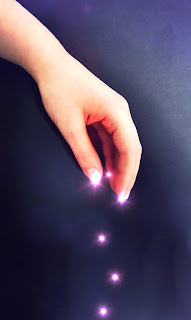 Creating a remedy is more difficult than it looks. First the magician has to create the spell that the remedy is intended to deliver.

Then, instead of being projected directly from his or her force field, the spell must be distilled into concentrated droplets of magical energy. Every drop the same, twenty per small remedy bottle, falling precisely from the magician's fingertips.

It could be a basic spell, as for the Portal Remedy, or it could be a complicated spell with several layers as for the Dream Remedy. The colour of the magical energy varies according to the spell.

It is usually added to a neutral base liquid, which is made from Androva's domina fruit. However, in emergency situations, the magic can be administered without the liquid. Just as well, otherwise the Legacy of Androva series might have already come to a rather abrupt end!