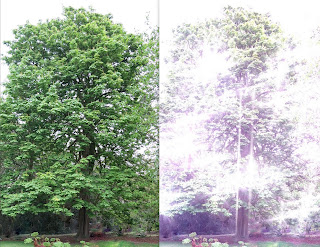 A couple of months ago I posted about what a tree looks like when a magician has made its living magic visible. At the beginning of Stealing Magic, when Jax and Darius first open their portal, Shannon is half asleep under the chestnut tree in her garden. I've since been asked to show what that particular tree would look like, so here it is ☺

Chestnut trees grow to more than one hundred feet tall and live for hundreds of years. It's safe to say that their living magic would be extremely powerful.

To a non-magician, living magic can be almost too bright to look at. Shannon can only open her eyes properly when she touches the force field of the tree and unknowingly ignites her own spark of magic. The reason why this is possible is revealed in the third book, Seeking Magic.

When Mr Blackwood, Shannon's father, first sees living magic, he is worried that his neighbours will think an alien spaceship has landed in his garden!