The Art of the Back Cover 📘 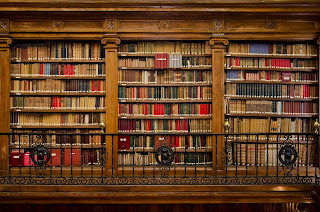 Welcome to the first blog post of a new month! I hope everyone is having a good weekend. I went to a bookshop yesterday and while I was browsing I got to thinking about the importance of the back cover. Book descriptions, or blurbs, can be very difficult to write. The description is a sales pitch to the reader and striking the right balance between informative and intriguing, while remaining true to the story inside the cover, is something of art. (And not an art I would claim to have mastered!).

Today's blog post contains a list of my top ten suggestions of what to consider when writing a description and also a look at some different descriptions for a popular book.

Of course, this list is subjective and based on my own experience, but these are the things I try to bear in mind. I've added examples from the excellent description for Artemis Fowl, by Eoin Colfer, a bestselling MG fantasy adventure. As you can see, it manages to convey a lot of information in a very effective way with a low word count.
I thought it would also be interesting to compare a description for the same book in different markets. I chose the first book in the Harry Potter series because I know the story very well but it's been a long time since I looked at its description.

Amazon UK
Harry Potter has never even heard of Hogwarts when the letters start dropping on the doormat at number four, Privet Drive. Addressed in green ink on yellowish parchment with a purple seal, they are swiftly confiscated by his grisly aunt and uncle. Then, on Harry's eleventh birthday, a great beetle-eyed giant of a man called Rubeus Hagrid bursts in with some astonishing news: Harry Potter is a wizard, and he has a place at Hogwarts School of Witchcraft and Wizardry. An incredible adventure is about to begin!

Amazon US
Harry Potter has no idea how famous he is. That's because he's being raised by his miserable aunt and uncle who are terrified Harry will learn that he's really a wizard, just as his parents were. But everything changes when Harry is summoned to attend an infamous school for wizards, and he begins to discover some clues about his illustrious birthright. From the surprising way he is greeted by a lovable giant, to the unique curriculum and colorful faculty at his unusual school, Harry finds himself drawn deep inside a mystical world he never knew existed and closer to his own noble destiny.

Amazon India
The story unfolds with a letter arriving for Harry Potter, a simple boy, that brings with it a dark secret. The letter reveals to Harry Potter that both his parents were wizards and were killed by a Dark Lord’s curse when he was just a baby.
Thereafter Potter's journey to the Hogwarts, a school of wizards brimming with magic, mystery and enchantment, spins out into a fascinating tale. After his journey to Hogwarts, young Harry learns of a missing stone — a stone which can be both terrifying and valuable at the same time, depending on who possesses it and how one uses it. Will Harry Potter and his friends be able to get hold of the stone?

Apart from the slight amendment to the title, the UK and US descriptions aren't too dissimilar in terms of the information they contain. However, the UK version ends on a short sentence promising adventure (with an exclamation mark!) whereas the US version ends on a longer sentence that's much more detailed. The third description, from Amazon India, is quite different to the other two. It's more considered, and reveals more about the plot. For example, it specifically mentions Harry's nemesis and also the stone in the book's title.

What do you look for in a book's description? How much does the description influence your decision to buy? I hope you enjoyed my thoughts on the art of the back cover, and thank you very much for visiting my blog today!