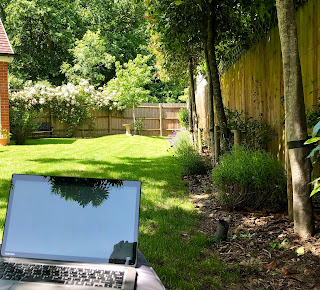 It's a hot and sunny weekend in the UK, and I'm writing this blog post in the garden 🌳🌺. On days like this, it's easy to imagine stories about living magic 🙂.

Now that Spell Mason is less than a week from its Kindle release date, I'm free to concentrate on something new. In the case of my next book, I'll be writing a new story but also revisiting some familiar faces, and I can't wait! Beyond Androva will kick off with Serena, Galen's sister, and the adventure she encounters when she visits a brand-new world at the end of Surviving Magic. Her story will only mention the Legacy of Androva timeline briefly as a scene setter. Everything afterwards will be completely different.

After a year of writing Light Mage stories, I thought a character interview would be a great way to reconnect with Galen as a starting point for the new book. Here's what he had to say for himself. I hope you enjoy the interview, and thank you very much for visiting my blog today 💕. 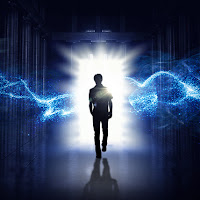 Interview with Galen, set after Surviving Magic
Me: Thanks for talking to me again.
Galen: (smiles briefly) My pleasure. Although I have to confess to an ulterior motive.
Me: What’s that?
Galen: You’re a storyteller. And I thought my story had been told. Yet here you are. I can’t help wondering why.
Me: Perhaps your story isn’t over.
Galen: Ah, but it is. My role in the treaty between Androva and Terra is done. I assure you.
Me: Then perhaps it is time for a new story.
Galen: Not for me.
Me: Are you trying to put me off?
Galen: (raises eyebrows) Is it working?
Me: A bit. If I thought you hated the idea, I would probably struggle to write about it.
Galen: What idea?
Me: Serena.
Galen: (pauses) I hope you’re joking.
Me: Readers are interested in her. She’s determined. Smart. Funny.
Galen: I know that. She’s my sister, isn’t she? And she also deserves to be happy. Her story should not be worthy of a Terran book. It should be ordinary. Safe.
Me: What do you think she would say to that?
Galen: Don’t you dare ask her.
Me: I don’t have to. Look, you said you wanted her to be happy.
Galen: (sighs) I do.
Me: She’ll go to a new world whether I write about it or not. You know that.
Galen: Can I go with her?
Me: (smiles) I thought your story was over.
Galen: (rolls eyes) So did I.
Me: I’d rather you didn’t go with her. She deserves some space to figure things out for herself.
Galen: Are you saying you think I would interfere?
Me: No. Just that your magical ability casts a long shadow. And now you’re past the whole Angelus drama… I can see you becoming a bit over-protective.
Galen: Don’t write me out of Serena’s story. I refuse to leave. I’ll haunt your imagination until you have no choice but to include me.
Me: I’ll include you. At the beginning. What happens after that is up to Serena. The same as what happened in Surviving Magic was up to you.
Galen: All right. That’s reasonable. Wait… Serena will be telling the story? Like I told Surviving Magic?
Me: She will.
Galen: Oh. She can be quite outspoken, you know.
Me: So can you. On occasion.
Galen: Fair point. So… which world is she going to?
Me: You’ll find out soon enough. The story is about to begin.
Galen: Not Imbera. Anywhere but Imbera.
Me: No. Not Imbera. I guess I can tell you that much.
Galen: Thank Androva for that.
Me: I’m going to end the interview there. Galen will return in Serena’s story at the end of 2019.
Galen: Yes, I will.
Me: (laughs)