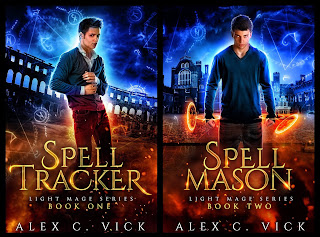 After the events of the last chapter, Luca/Avi wants Devin to go and talk to Leander. Luca can't do it himself because Leander thinks he's dead. And it's still a risky plan given that Devin is from the twenty-first century. But there's a good chance the events in the Colosseum have some bearing on the current day and the reason Cass is struggling with her life path. Both Luca and Devin think it's worth a try.

Warning: there is reference to gladiatorial combat and character death in this chapter.

You can catch up on chapters one through twenty-two via the New series label at the top of this post, and thank you very much for reading 💕.

“What? How?”
“Er… with a sword?” I said.
“No. I don’t mean that. I mean… she’s a boy. How is she a boy?”
“The same way you are. Because her life path says she is.”
“You mean…?”
I nodded. “You could be a girl next time. Most lessons have to be learned as more than one gender.”
“I suppose that makes sense.” He looked back at the arena. “She got a bad deal, didn’t she? It looked like you were allies. I hope some of her other lives were happier.”
“It depends,” I said.
“On what?”
I sighed. “On whether the lesson she won’t learn can be traced all the way back to my death.”
That’s what I was afraid of. If it were true, it would mean her current situation was partly my fault. I’d thought I was saving her, not condemning her. I pushed down the guilt before it could take hold. Irrelevant, Luca. This is not about you.
“Is that possible?” asked Devin.
“Yes,” I admitted.
“How can we find out?”
“Well… you could talk to her. Ask her some questions.”
He frowned. “How can I? She doesn’t know anything about this.”
“Sorry. I meant, you could talk to him.”
Devin’s eyes widened. “You want me to talk to the gladiator? Could… could I do that?”
“Well, I can’t,” I said. “I’m dead, remember?” 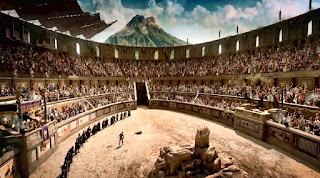 He looked at me, then back down at the body in the arena. The sword had been removed, along with the helmet, and there were rose petals strewn everywhere, hiding its injuries. Its hair was dark with sweat and a line of blood ran from its lips halfway down its neck. Cass took a feather from her own helmet and kissed it, before placing it on the body.
Devin put his head on my shoulder for a second as if making sure I was still there. “Avi. That boy down there with you. Did he… did he love you?”
“We never said it. We promised we wouldn’t. Not until we’d won our freedom.” We shouldn’t have waited.
“Avi,” said Devin again, his voice low. He put his arms around me and I leaned into him. Then I felt ashamed at how selfish I was being.
“It happened a long time ago,” I said.
“No, it’s happening right now,” he argued.
“Yeah, but we can’t change it. The best we can do is understand it. Look, the congratulations are over. Cass is leaving. We need to follow.”
I assumed she would be returning to the Ludus Magnus, at least for tonight. There was a tunnel connecting it to the Colosseum, allowing the gladiators and animals easy access on games days. When we stood up, Devin made a noise of surprise.
“What?” I asked.
“I… er… I’m not wearing any…” He looked down at the toga.
“No,” I said, smiling at his embarrassment. “Underwear is a relatively new earthbound custom.”
“I thought it felt weird when we arrived, but then I got distracted. Are…?” He stopped.
“No, I’m not,” I said.
He blushed and did a terrible job of trying not to look. “Can we leave now?” he asked, finally succeeding in averting his gaze.
Devin and I remained unnoticed under my non video as we made our way through the press of bodies, apart from when he trod on his toga and nearly tripped us both up. “Sorry,” he said. “It’s these sandals. They’re impossible to walk in.”
I muttered a spell to shorten his toga slightly, putting my hand on his back to guide him in the direction I wanted us to take. I knew the Colosseum better than any casual spectator, and soon enough we were in the tunnel itself. It was hot and filthy with barely any natural light. Years of destructive emotions swirled in the air like an invisible but cloying fog. It would take a lot of guardians a long time to remove them.
I concentrated on what we were there to do. Life lessons were pursued in increasing order of difficulty, each magician advancing through the levels in sequence until they passed—or not—their final test. The path was predetermined according to their own choices and desired profession.
There was an earthbound equivalent for every role in the magical dimensions. Spell Masons, for example, were the broadest and could be matched to a variety of jobs from bricklayer to architect. Spell Weavers to painters, writers, and composers. Animal Mages, Spell Brewers, Spell Techs, Spell Masters, Healers… it didn’t matter. There was a path for all of them.
Even for him. Even for me. 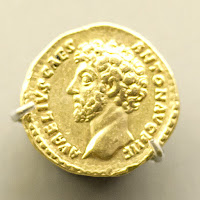 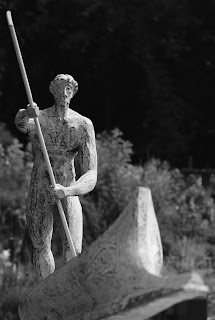 “She asked me to make sure they put a coin in your mouth to pay the ferryman. I don’t… I don’t know what that means, but I promised her anyway. She…” He trailed off. “She told you she loved you. In the arena. At the end. She asked me if I thought you’d heard her—” Devin’s voice broke.
I hesitated mid-step. She was so close. I could turn and run to the Ludus Magnus right this second and tell her it had been my choice. It wasn’t her fault. I’d be breaking almost every rule in the earthbound dimension, but I was finding it difficult to care.
Damnit, she’s the reason I became a guardian. I could never have helped all those other assignments without her. Doesn’t she deserve something in return?
When a Light Mage loves someone enough to willingly sacrifice their own life and thereby provide the ultimate proof of their selflessness, they graduate their life path and become a guardian. As I had done when I’d saved Cass.
I don’t give a damn about the rules. I’m going to find her.
Devin put his hand on my chest to stop me. “Don’t. I can feel what you’re feeling and I hate it too, but you said it yourself. This Cass isn’t the one who’s in danger.”
“Leander,” I whispered. How could my heart be breaking when I didn’t even have a heart in this dimension?
“Listen,” said Devin, “some of what she said was familiar. We should focus on that, shouldn’t we?”
With effort, I turned my mind to what he’d said. “How do you mean, familiar?”
“The survivor guilt thing. Blaming herself. I learned the term after Cass’s mom slashed her wrists. Cass told me her therapist said she was a textbook case.”
My mouth opened. “How do you know so much about it?”
He started walking again and pulled on my hand to get me to join him. “We were friends, once. She helped me get over our dad. I trusted her because she lost him too.”
“I know you were friends in junior high, but that was before her mom died.” I frowned, trying to remember the timeline I’d followed the night before.
“We were friends after her mom, too. She told me…” He gave me a sideways glance. “Didn’t you think it was a tiny bit similar to her mom—all that blood when you died? She hates blood, you know. Even the smallest cut. She can’t bear it.”
“No, I didn’t know. Why aren’t you friends now?”
He scowled. “I wish I had the answer to that. She claims we weren’t ever really friends. She accused me of making it all up. She said she had blackouts or something. It… it hurt. It still hurts. But I gave up trying to convince her. You can only bang your head against the wall for so long.”
“She did have blackouts,” I said, feeling the need to defend her.
“I know,” he acknowledged. “It’s just an unlucky coincidence they seem to cover every single happy memory she made with me.”
Yeah. That is a coincidence. Except… there’s no such thing. The Master Mages eliminated it from this dimension.
I walked faster, keen to get back. It felt like I might have found a way forward at last.