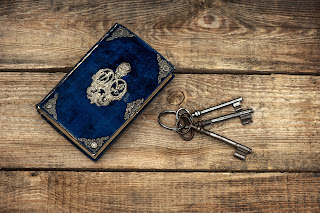 What's more important to you as a reader? Is it that the protagonist needs to be fascinating and the villain complicated? Or do you prefer a fast-paced adventure with an unexpected twist at the end? I was thinking about my own reading preferences in advance of today's post, and I came to the conclusion that I'd take both 😏. If I had to choose, I guess I have a preference for characters over plot because it's rare that I fall in love with a book without falling in love with one or more of the characters too.

It's a widely-accepted truth that most writers have a natural bias toward either plot or character. You obviously need elements of both in order to create a satisfying story, and therefore it can take some work to maintain a balance. As we head into the month of March, I'm in the early stages of writing Engraved in Magic, the second book in the Beyond Androva series. I got to wondering if my bias is plot or character.

My instinct told me it was character because I can't plot stories in advance. I haven't given up trying, but for now, I really can't. And the more I thought about it, the more certain I became. I've always started with the character(s). Jax, for example, showed up in my head right at the beginning of Stealing Magic. His appearance and personality were fully formed, whereas the plot of Stealing Magic was invisible to me. I discovered it chapter by chapter as I wrote it. It grew up around Jax and Shannon. They made it happen because of their choices. I did take some guesses as to where the story was headed, but those guesses were so far off base I'm too embarrassed to describe what they were!

I asked my beta readers for their opinion, (a small sample size, but they know my writing pretty well), and the response was split 50:50. So I guess there might not be a definitive answer...

In conclusion, I will try to keep a balance between the two. It doesn't matter if my characters come first, as long as they always bring a plot with them for me to discover while I'm writing. In fact, a mysterious new character has just turned up in Engraved in Magic during Chapter Six, and I'm pretty sure he has an intriguing and potentially dangerous backstory. I don't know what it is yet, but I'm sure I'll find out! Thank you very much for visiting my blog today and happy reading 😊.