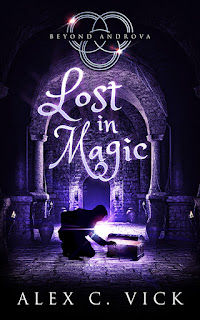 “All the whole time
I was my chamber’s prisoner.”
— William Shakespeare
Today’s blog post is an update on the story of Xytovia’s most famous prisoner, Kellan Bavois. Lost in Magic, the third book in the Beyond Androva series will be released next month!
As always, there is a short prologue to set the scene for things to come, then Kellan takes over as the narrator. I hope you’ll enjoy finding out what happened to him and the challenges he faced when he parted ways with Art and Serena at the end of Engraved in Magic. I loved writing from Kellan’s perspective.
The pre-order for the eBook (3rd June 2021) will be up on Amazon very soon, and I’ll update this post with a link when it’s available. The price will remain at £0.99/€0.99/$0.99 until the release date.
Update ☺
Amazon UK Lost in Magic
Amazon US Lost in Magic
The description and the prologue are below. Thank you very much for visiting my blog today, and if you decide to read Lost in Magic, I hope you enjoy it!

Magic, mystery, and murder.
Second chances can be complicated.
Kellan is a seventeen-year-old magician who just escaped from prison. After almost two centuries in a Dimension Cell, reliving the same day over and over with only his nightmares for company, he emerges into a very different world from the one he remembers. War, mage-sickness, and a mandatory Bonding Spell have transformed Xytovia.
His rescuers, Art and Serena, are trying to put things right, but their actions are not welcomed by everyone. At first, Kellan's only allegiance is to himself. He's not interested in making friends, much less risking his life for them. Then he stumbles across a cry for help from the past, and he's drawn into a conspiracy that quickly becomes very personal and very life threatening.
Kellan thought his problems were over when he was released from the Dimension Cell. It turns out they were only beginning…

Averine watched as the hint of golden light disappeared behind the mountain. Her last sunset. She had not made a habit of staring at sunsets before this one. And yet, when the fiery colours filled the sky, she felt a pang of regret, knowing she might not see them again. She set her jaw, pushing the emotion away. Regrets were manageable. Regrets wouldn’t keep her from the cure, but dying would.

Shadows gathered as the light faded, hiding the rocks and grass on the mountain’s slopes beneath a veil of darkness. She drew up her knees, looping her arms around them as she leaned into the corner of the window seat. The Gallium Dagger lay on the table where her father had placed it after creating the message she would leave behind. Its magical energy shone brightly in the gloom, reminding her that she was almost out of time. The Stasis Spell had to be applied tonight. Before the deadly mage-sickness attacking her body reached her heart.

With a sigh, she turned back to check the horizon. A breeze found its way through the partially open window, lifting the curtain of reddish-brown hair resting against her collar. The last of the light had gone. Averine reached to close the window, carefully pushing aside the sprawling blue leaves of the vines clinging to the exterior wall. Though much of the city was in ruins, her father’s house was still standing due to the extensive use of Protection Spells—a privilege of his position. It was hoped the imminent truce would enable rebuilding to begin. After forty years, the war was finally over. And everyone lost, thought Averine bitterly.

The door opened. It was time. She was trembling a little, but her fear did nothing to lessen her resolve. This was the only solution. To Averine’s disappointment, her father wasn’t alone. He was accompanied by the alchemist, Averine’s least favourite person by a considerable margin. Both of them were wearing titanium gloves that shone silver in the semi-darkness.

“I’m not taking any chances with your life,” her father explained.

“I know,” he said. His face tightened. “I am going to put this right, Averine. You will wake up, and you will survive. We will find a magician whose force field is undamaged to administer the cure.”

The alchemist smirked. “We’ll find them. Especially with that message of yours. Who could resist such a heartfelt cry for help?”

“So authentic,” the alchemist continued. “No one would ever suspect.”

“Marath, don’t,” said her father with a scowl.

The alchemist, Marath, gave him an assessing look, her grey eyes expressionless. “Your father and I disagree on something.”

“He thinks we shouldn’t tell you the cure will kill the magician who administers it. I think we should. What’s your view?”

“Is it true?” Averine repeated, her voice raised.

Her father gave a heavy sigh. “It is. But you have to understand, the cure could save everyone. Half of the world is already dead. What’s one more life if we can save the rest?”

“Are you going to warn them?” said Averine.

The silence that followed her question was as good as any confirmation.

“I’m going to change my message,” said Averine. She turned to the table, and Marath and her father exchanged a glance of perfect accord, stepping forward together.

“I won’t let you send someone to their death without giving them all the facts. I have to—”

Averine broke off with a choking sound as Marath flicked a thin titanium rope around her neck and tightened it. Her father grasped her shoulders and dragged her to the table, pinning her to its surface while she kicked and arched her back in a desperate attempt to escape.

Marath picked up the dagger and held it to Averine’s struggling body. It burned her skin through the tailored grey shirt she wore, and she froze, her eyes wide and bloodshot. Marath didn’t hesitate. The second Averine stopped moving, Marath drove the dagger straight into her heart.