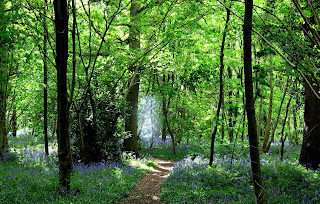 None of the stories in the Legacy of Androva would be possible without portals. They're amazing, but they can also be quite dangerous. If you get the coordinates wrong, or if the portal closes unexpectedly, or if it lets the wrong person through... all of these could be a potential disaster.

This is the wood next to Shannon's house. The photo is from late spring, sometime in between Stealing Magic and Capturing Magic. The only sign that the portal is open is the tell-tale shimmer in the air, right at the end of the path. Portals are supposed to be hard to see. Magic-taking would never have remained a secret for so long otherwise. If they were like blazing rectangles of light, someone would have noticed eventually!

On Androva, most buildings have their own circular portal rooms, which are built deep underground. After Stealing Magic, the prospect of regularly opening a portal to Terra in broad daylight was something that made the Androvan Council quite nervous. As you can see, it insisted that the coordinates were set deep inside the wood.

At the time this photo was taken, there were obviously no portal rooms on Terra. You'll have to read Capturing Magic to find out if that ever changed!