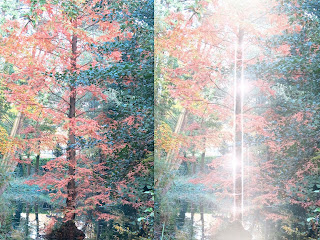 Living magic is the force field that exists inside every green living thing. Plants, trees, flowers--they all have one, although tall trees have by far the strongest.

Magic-takers from Androva travelled to our world (Terra) for nearly two thousand years to harvest its abundance of living magic. An ancient treaty granted them permission. The harvested magic was needed to protect their world and ours too. This was supposed to last forever. But forever suddenly got a lot shorter, when an underage magician called Jax took it upon himself to make a forbidden daylight harvesting trip!

If you're a magician, your own force field allows you to access the living magic around you and use it to boost your own ability. Walking through a Terran forest is like being surrounded by electricity. It's almost impossible to completely suppress your force field. Anyone looking closely would probably notice your eyes glittering.

The photo shows you what this tree looks like when a magician has drawn out its force field. Imagine what it was like for Shannon at the beginning of the first book, opening her eyes and finding herself surrounded by living magic!