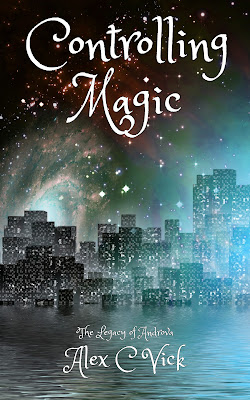 This is the cover for the fourth book in the Legacy of Androva series! Controlling Magic will be published at the end of December. It's a self-contained story, as are all the books, and it takes place about four months after the end of Seeking Magic.

It's now one year since Jax and Darius, two magic-takers from Androva, first made their forbidden daylight trip to Terra (Earth). I think it's fair to say that it's been an interesting twelve months!

The 'Controlling' in the title has two meanings. The most obvious one is that a new magician is figuring out how to control their magic. But there is also something more sinister going on.

I've always written about how great it is to have a magical force field. This time I wondered what would happen if it became a disadvantage. What if someone could use your force field as a means of controlling you? And how would you escape if they did?