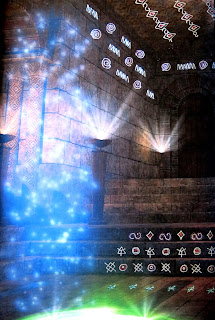 Today's post is about portal rooms. They are built deep underground, to ensure that the magicians using them are as protected as possible. There was a particular incident in Androva's history, as explained in the first book, which brought home the realisation that portals can be incredibly dangerous if not carefully managed.

Androva did go slightly overboard with rules and regulations in the time since then, and my protagonists are still doing their best to force the Androvan Council to move with the times!

I've included two excerpts, which show how much things have changed in the series. The first excerpt is from Stealing Magic, when Shannon steps into Androva straight from her garden, having just met Jax properly. The second excerpt is from the fourth book. Andy, the brother of Shannon's friend Penny, is taken down the stairs to a Terran portal room by Penny and Jax's friend Darius.


Shannon blinked. She had grabbed Jax’s hand a split second before, taken three steps forward, and the world had changed. Quite literally, as it would turn out. They were now in a small dark room with lots of symbols painted in various colours on the walls, floor, and ceiling.

She looked down and realised she was standing on some kind of circular mat that glittered and felt slightly rough under her feet. The air around them was shimmering gently, and as she watched, the shimmer retreated downwards, leaving the air clear. The mat no longer glittered and was now a plain dark green colour.

“This,” said Jax, gesturing downwards, “is my spellstation.”
He sounded very proud of something that, to Shannon, seemed rather ordinary.
“Green is the most powerful colour,” Jax continued. “And it’s big enough to transport two magicians who are of age. No other magician as young as me has managed such a feat before.” 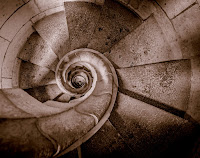 
She took Andy’s hand and started pulling him back the way they had come. Soon enough they had arrived at the portal room stairs. Half way down the stone steps, spiralling down and down with only faded Illumination Spells to light the way, Andy started to resist.

“Where exactly are you taking me?” he asked. “All that… back there. It was kind of weird, kind of cool, but definitely… not from around here.” He looked at Darius. “How do I know this isn’t a kidnapping and you’ve got my sister under some kind of spell to follow your orders?”

Darius laughed before he could stop himself. “Believe me, there is no spell on Androva that could get Penny to follow anybody’s orders.”

Andy narrowed his eyes for a second and then nodded slowly. There was the ghost of a smile on his lips. “Fair point. I believe you.” Penny, behind him, gave his leg a kick in protest. “Is that where we’re going then? Androva?”

Darius nodded, and Andy started moving again. Quickly and efficiently, Darius opened the portal, his Sygnus starting to spin as he entered the coordinates. He held out his hand, and Andy looked at it suspiciously.

“Dude, I am not holding your hand,” he said. Penny suppressed a snort of laughter at the look on her brother’s face.

“No,” said Darius patiently, “I need your phone. It will stop working if I don’t protect it first.”

Thank you for reading, and I hope you enjoyed the excerpts!