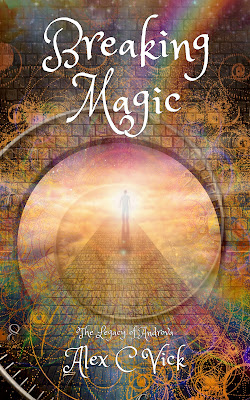 Today I'm excited to be able to share the cover for the fifth book in the Legacy of Androva series! Scroll down past the book's description for a look at the prologue and first chapter. Breaking Magic will be released on May 1st, with a special launch price of $0.99.


But in protecting his younger brother Benedar, he was noticed by the Breaker, the evil magician in charge of the Gathering. The closer Callax gets to the ruling house and the girl who lives there, the more he learns, and the greater the danger. A danger he might not understand until it is too late. Callax thinks the Breaker’s defeat will save him, but he is wrong.
Additional information: Breaking Magic’s story can be read independently of the other books, although it is part of the Legacy of Androva universe. However, if you have read Controlling Magic and want to know more about Imbera, Breaking Magic is Cal’s story. The book retells part of Controlling Magic from Cal’s point of view.


“What happened to you? You look terrible. It’s not the sickness, is it?”
Varun shook his head. He was deathly pale. In the low light of the underground workshop even his hair looked white. I glanced at Garrett, who frowned.
“You should have told us you were testing again,” Garrett said. “We could have helped.”
Garrett was exhausted. We all were. The sickness had killed so many of us. There were almost no elders left. Our parents were long gone.
The three of us had been the best magicians at the Academy. Friends and rivals. As close as brothers.
We’d been searching for a cure ever since it started. But all we’d managed to do so far was slow it down.
“I didn’t need your help. I figured it out on my own.”
“You figured out what?”
His eyes gleamed.
“I can stop it. I can stop the sickness.”
“What?” said Garrett incredulously.
“But… how?” I added. “I thought we didn’t have enough magic left. All the spells we’ve tried lately haven’t worked.”
“I found a new energy source.”
“Where? When?”
“How does it work? Show us!”
Garrett and I were speaking over each other in our excitement. The first hope I’d felt in months was sharp and almost painful.
“Oh, don’t worry, I’ll show you. We have plenty of time. We’re going to live forever.”
Silence. I thought I’d misheard, but his expression was ominously serious. The back of my neck prickled.
“What did you say?” asked Garrett slowly.
“You heard me.”
“But… that’s more than a cure,” I said. “We can’t change the balance between life and death. I don’t want to live forever.”
“Don’t you? Pity. I could have guessed you’d say that. Cal the do-gooder. Always on the side of what’s right.”
I stepped backwards. This was getting very weird, very fast.
“Look, Varun—” Garrett said, but he was interrupted.
“No. You do what I say now. Now and forever. Both of you. All of you!”


Chapter One - My First Gathering