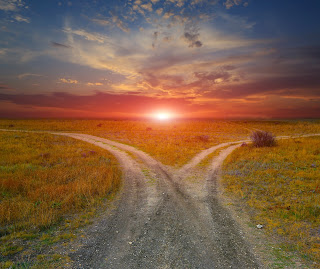 Which path does my character choose when he doesn't know which one will lead to his death and his conscience won't allow him to stand still?

The sixth book is going to be Galen's story. I've been surprised (in a good way!) by how popular his character has been, considering he's only in one book so far. He lives two thousand years in Jax's and Shannon's past and his life was complicated even before they met him. The present-day Androvan Council know him as the Missing Magician, and it's fair to say he chose to disappear for a very good reason.

I'm writing his story, because there is a lot more to Galen's past than I was able to explain in Seeking Magic. But I also felt there were too many unanswered questions about what happened when Jax and Shannon left ancient Pompeii. They told Galen about the terrible history of Androva and Terra. A history that, as far as Galen was concerned, hadn't happened yet.

What does he do with that knowledge? If he tries to change the future, he could end up making things worse. Or he might die in the attempt. His life, and the life of the girl he loves, are not the only ones at risk. Not to mention the impact on Jax's and Shannon's future too.

I haven't decided how things will end up yet and I thought sharing where I've got to might help me to make my mind up. The problem is that I love all of my characters, and I hate putting them into such horrible situations. But I just don't think Galen would be able to ignore what Jax and Shannon told him. Thank you for reading, and if you have any strong opinions, I'd love to hear them!