Today’s blog post is about dialogue tags and the challenge of getting the balance right. This is my experience only, and it is not intended to be either expert or all-encompassing!


Dialogue tags can be a good thing or a bad thing, depending on how they’re used. There are different schools of thought about the right/wrong approach, but my view, as a reader, is that they should be invisible. If the dialogue tag pulls you out of the story in a “Notice me!” kind of way, then it’s not doing its job properly.
Therefore, using “said” most of the time makes sense to me. However, a little variety in dialogue tags can be great because it’s a quick and easy way to reveal more about the character, as long as you guard against tipping the balance too far from showing into telling. But the challenge is how to introduce that variety. When I sat down to think about it I realised I use four different techniques over and above the ubiquitous he said/she said:


1.      Adverbs
I know adverbs are disliked by a lot of people… but I don’t mind them. Every so often, my characters say things softly/angrily/slowly etc.
2.      Action tags
When I’m writing a conversation, I sometimes break it up with action tags to show which character is speaking, instead of using dialogue tags. Something like: “he shook his head,” or “she considered this,” or “his eyes widened,” before the character speaks.
3.      Said +
This is where I categorise tags like asked/replied. I use these much less than “said,” but they still turn up regularly.
4.      Said +++
Finally, this is how I think of the more unusual tags. I save these for occasions when I want to make an impact. Examples include: shouted, snapped, muttered, stammered, and protested.


I feel I should also mention my learning curve (thanks to my editor) about what is not a dialogue tag: sighed/laughed/grinned/scowled etc.! Out of curiosity, I did a quick check on Breaking Magic to see what the outcome was in terms of dialogue tags used: 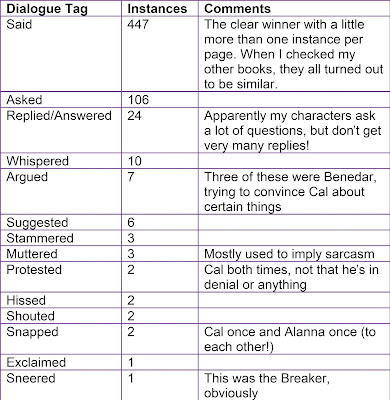 Finally, I looked at an extract from Harry Potter and the Order of the Phoenix by J.K. Rowling. Not just because I love the books and the writing, but because I was curious to see the dialogue tags that were used in the famous scene where Umbridge is asking Snape about the DADA position. Alan Rickman did such a masterful job with all of Snape’s lines, but “Obviously” is one of his more memorable ones.

"You applied for the Defence Against the Dark Arts post, I believe?" Professor Umbridge asked Snape.
"Yes," said Snape quietly.
"But you were unsuccessful."
Snape's lip curled.
"Obviously."
Professor Umbridge scribbled on her clipboard.
"And you have applied regularly for the Defence Against the Dark Arts post since you first joined the school, I believe?"
"Yes," said Snape quietly, barely moving his lips. He looked very angry.
"Do you have any idea why Dumbledore has consistently refused to appoint you?" asked Umbridge.
"I suggest you ask him," said Snape jerkily.


I think that J.K. Rowling used a brilliant blend of dialogue tags, action tags and adverbs in this scene. And “Obviously” has its own line on the page, which works perfectly. 😊


What’s your view on dialogue tags, either as a reader or a writer? Do you have a preferred style, or do you adapt according to whatever you’re reading or writing at the time? Thank you for stopping by my blog today!