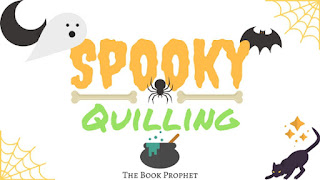 I'm excited (and nervous!) to be able to say that I've signed up for a writing challenge with a Hallowe'en theme this month. It's being run by Savannah at The Book Prophet and you should definitely check out her blog - you'll find reviews, writing, other bookish insights, and a lot of interesting ideas. Like this challenge, for example!

Anyway, on to Spooky Quilling...
You can read all about it here
There are five prompts and this is the first. It involves writing a 666-word story to explain the backstory of a villain (either one in your imagination or one in an existing story). This kind of writing is way out of my comfort zone, because I rarely write short stories, and I up to now I've only written stories about magic. Sticking to an exact word count was kind of tough as well.
(Do you see how I'm setting up the excuses before I share any of my writing?)

This is the story of my villain. He or she is completely imaginary and I very much hope we never meet. Thank you for reading!


She gave each of us the choice of making dreams or nightmares for the humans. By the time she got to me, all had chosen dreams. A predictable outcome. Yet she needed to create some darkness if the humans were ever to reach their full potential. Light and dark each grant visibility, the one to the other. And I never shrink from what must be done. Not now, and not then.
I chose nightmares. She smiled. “I might have guessed,” she said. “Very well. But take care you don’t lose yourself. The darkness has its own allure.”
Those early human nightmares were not sophisticated. All I did was magnify the worst of their waking lives. I invaded their unconscious minds and made them relive moments of my choosing with an extra layer of unpleasantness. I created fantastical monsters and I mocked their hopes and their desires. I twisted their memories into ugly parodies of the truth.
It wasn’t enough. I could tell she was disappointed and I knew I could do better. I sensed I was missing something. Then, one day, I found it. The fear of death. It was a rare human who did not possess it. And if they did not fear death itself, they invariably feared the means by which they would die.
Yes… they feared it. They dreaded it. And I embellished those fears. I lurked patiently in the shadows of their minds, until I found what I was looking for. Until I found what would cause their beating hearts to falter, as they experienced terror so acute it would feed itself, keeping them trapped in the nightmare and at my mercy. And mercy was not in my job description.
Sleep does not just incapacitate the body. It also leaves the mind wide open to manipulation. In the lonely depths of the night, humans are at their most suggestible. It was a game to me. I learned how to locate the dark strands drifting in their subconscious, the ones that would lead me right to the fears they tried to keep hidden even from themselves. But they could not hide them from me.
Some humans were afraid of torture. The kind of agony that would steal their sanity and their dignity. Many could not bear the sensation of falling and being utterly powerless to stop their descent. I made the ground disappear from under them and their horror would explode as if their entrails had already splattered all over the sidewalk.
Some hated the thought of suffocating, perhaps with half-decomposed hands squeezing their throat, or locked in an underground room filling inexorably with freezing water. Others did not want to die alone. Those, I would bury alive with no way to raise the alarm, then introduce hundreds of scuttling, ravenous creatures to keep them company.
My favorite moment was showing them that someone they loved was to blame. I’d create an image of this other human, whose face would twist with malice as they laughed at the stupidity of the human in the nightmare for ever trusting them. I became very good at it. For some humans the nightmares persisted, even when they woke.
She told me it was enough. I told her I agreed. But it wasn’t enough for me. I could do more. I knew it. If I could make them doubt what was real, if I could bring the nightmares into their waking world, I could haunt the humans there too. I could magnify their fears until fear was all they knew. I just needed a bridge. A human to let me in. As it turns out, I found more than one. Many more. Together they and I created so much fear that nearly everyone has nightmares these days. But I still enjoy making them unbearable for a lucky few. She warned me I might lose myself, but I think I've found my true calling.
Perhaps you and I will meet one day. Or night. Sleep well, won't you?

OH MY GOD THIS IS AMAZING!!! Thank you so much for taking part!

Thank you!! I'm really glad you liked it :-)
It was a fascinating prompt, so I should really be thanking you!