I had to research a new—to me—period of history for the last Legacy of Androva book and it got me wondering about how often fiction reimagines the facts of the past. My own books, for example, create a potentially different history for our world, where the present remains unchanged.

But just how reliable is 'real' history? I thought I would illustrate how difficult it is to know for sure with a bit of information about Anne Boleyn. I haven't managed to incorporate the Tudors into my writing yet, but it's one of my favourite periods of history, so I might rectify that in a future book! Anyway, returning to Anne—King Henry VIII of England had six wives, and she was the second.

She was born in 1501, and died in 1536. We can suppose there must have been something special about her, because Henry broke with the Catholic Church in order to make her his wife. And he first started writing love letters to Anne in 1526, but did not marry her until 1533. That's a long time to hold the interest of a King!

Henry had her beheaded for treason. Five men, including her own brother, were also executed. This information, in and of itself, appears to be undisputed. But everything else about what happened, including who was innocent or guilty, is not completely certain.

Here are some extracts from contemporary accounts of Anne's execution. 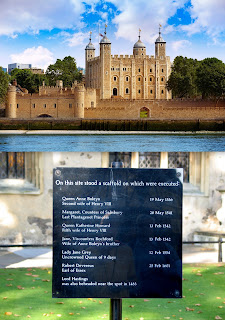 The Tower of London, early morning on 19th May 1536. Anne, formerly Queen of England, is brought here to die. A French swordsman severed her head from her body. Before he did, she made a speech. But what did she say?

Version 1 The Queen suffered with sword this day within the Tower, upon a new scaffold, and died boldly.
Letter, John Husee to Lord Lisle

Version 2 The said Queen (unjustly called) finally was beheaded upon a scaffold within the Tower with open gates. She was brought by the captain upon the said scaffold, and four young ladies followed her. She looked frequently behind her, and when she got upon the scaffold was very much exhausted and amazed. She begged leave to speak to the people, promising to say nothing but what was good. The captain gave her leave, and she began to raise her eyes to Heaven, and cry mercy to God and to the King for the offence she had done, desiring the people always to pray to God for the King, for he was a good, gentle, gracious, and amiable prince.
The Vienna Chronicles

Version 3
"I here humbly submit me to the law as the law has judged me, and as for my offences I accuse no man … I beseech Jesus save my sovereign and master the King, the most godly, noble and gentle Prince there is, and long to reign over you" … which words were spoken with a goodly smiling countenance.
Wriothesley’s Chronicle

Version 4
"Do not think, good people, that I am sorry to die, or that I have done anything to deserve this death. My fault has been my great pride, and the great crime I committed in getting the King to leave my mistress Queen Katherine for my sake, and I pray God to pardon me for it. I say to you all that everything they have accused me of is false."
The Spanish Chronicle

Quite a range of different accounts, and all written by people who were around at the time! Of course, it makes things much more interesting for us readers. Any one of the many different retellings could be correct. Our imaginations are incredibly powerful. Which version do you think is most likely to be true? Thank you for visiting my blog today!