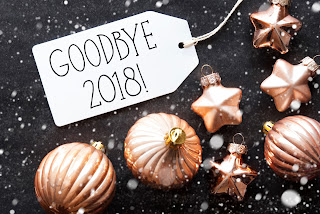 We're almost at the end of December, which means a new calendar year is right around the corner 🗓. It's traditional to think about setting some goals and, as usual, mine are going to be about reading and writing 😊. One of the benefits of having a blog is that I can also see exactly what I planned to do this time last year. Given that life never goes the way we expect, it will be interesting to compare my plan with reality!

Strictly glass half-full though. I can't change the past, but I can choose to focus on the good bits. And the New Year is more likely to go well if I approach it with a smile. 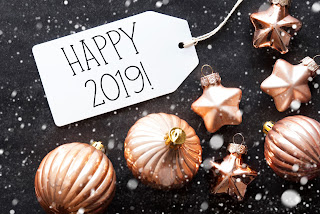 Here are the ABCs of my New Year's resolutions:

A is for Authors, old and new
"Books are good company, in sad times and happy times, for books are people--people who have managed to stay alive by hiding between the covers of a book."
- E.B. White

I usually read a lot, and I wanted to keep that going in 2018. As it turned out, life was a lot busier than I expected, so I have several more unread books on my Kindle than I would like going into 2019. There were times I sacrificed reading time in order to meet my writing targets. I think next year I will turn it around and focus on the reading if I ever have to choose between the two. After all, being an avid reader has to come first. I don't think I would enjoy the writing nearly so much if I didn't read a lot.

In terms of new (to me) authors I discovered in 2018, my top recommendation is William Ritter for the amazing Jackaby series.

B is for Book(s)
I aimed to write two books in 2018, and I achieved that particular goal (but only just!). I completed the Legacy of Androva Series in May and the first book in the Light Mage Series was released in December. If I were to aim really high, I'd love to complete the trilogy in 2019. However, I have some ideas/reader suggestions for Legacy of Androva bonus content, and I'm also thinking about a brand-new series set in one of the worlds Androva discovered when they were first opening portals all over the place. So... we'll see 🤷‍♀️😊.

C is for Characters
Characters are the most important element of any story. They're the reason I fall in love with the books I read and also my motivation for writing new books. Once the characters exist inside my head I have to carry on writing to find out what happens to them. And even though the Legacy of Androva is finished, I like to think that Jax and Shannon are still having adventures in a fictional world somewhere.

I discovered a few memorable new characters in 2018 and hope to do the same in 2019. Two books I would recommend because of their protagonist are Madame Tussaud, by Michelle Moran and Slated, by Teri Terry.

Looking ahead to 2019, the second book in the Light Mage Series will be written from Devin's point of view. Whereas Luca was more of a thinker, Dev is most definitely more of a 'take action' kind of character. He's proving to be a lot of fun to write, and I'm looking forward to knowing him better. And as for the final book in the trilogy, I'm not sure about that yet. It will be first person again, but the identity of the narrator will depend on who's still standing at the end of book two.

Finally, I hope your dreams come true in 2019 (and that you discover some amazing books to read as well!). Are you making any resolutions? Or are you going to figure things out as you go along? I wish you good health and happiness in the New Year, and thank you for stopping by my blog today!