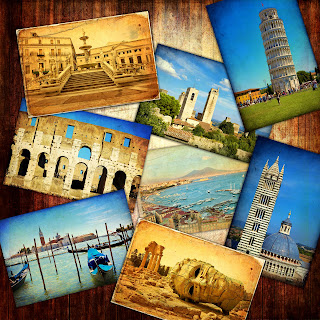 “A place is only as good as the people in it.”

One of the things I love about writing fantasy is the world building, and location inspiration can be really helpful, especially when you find somewhere that resembles one of your imaginary settings. After I finished the Legacy of Androva with Connecting Magic (more than three years ago―time flies!), I wrote a blog post to say goodbye to three of the most memorable locations in the series. I thought I’d do the same for the Light Mage trilogy now that the third and final book is almost finished.

Most of the Androva series locations were entirely fictional, aside from the notable exceptions of Pompeii and Verulamium. In the Light Mage stories, it’s more of a blend, with key scenes in each book happening in real-life places (albeit from an imaginary perspective!). These places also feature on the books’ covers, and I’m going to focus on them for today’s post.

Have you ever visited a particular location just because it was in one of your favourite books? And if you could buy a ticket to absolutely anywhere, real or fictional, where would you go? I hope you enjoy the Light Mage extracts, and thank you very much for visiting my blog 💕. 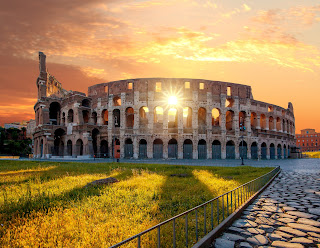 Luca, the protagonist of Spell Tracker, is a seventeen-year-old gladiator when his final earthbound life comes to an end. He sacrifices himself to save the boy he loves, dying on the dusty floor of the arena with a sword in his chest and the cheers of the Roman mob ringing in his ears. That sacrifice marks the beginning of Luca’s life as a guardian, and it’s the catalyst for everything that follows. I visited the Colosseum in Rome ten years ago, and I was overwhelmed by the size and scale of its history. It was great to be able to use those memories as part of Luca’s story.

Here’s a short extract from the moment Luca goes back in time with Devin to the Colosseum.

***The roar of fifty thousand voices, the heat, and the smell were overwhelming. There was a sense of anticipation similar to the one created by the spectators at tryouts, but it was mixed with a thirst for blood and death, adding a disturbing undercurrent that even a non-guardian could feel. I experienced a few seconds of disorientation even though I knew what to expect. Get a grip, Luca. If you lose yourself, we’ll both be stuck here.

Devin held my hand so tightly I winced. I leaned into him as we sat down. “Give yourself a minute to adjust. I gave you a layer of protection from the worst of it.”

With his other hand he smoothed the toga he was now wearing and stared at his knees. After a couple of breaths his grip relaxed a little. “So,” he said in a low voice, “we’re in Rome, right? This is where you come from. It’s like a…” He raised his head. “Like a stadium. What happens here? Chariot racing or something? I can see some horses.”

“No. Not chariot racing. This isn’t the Circus Maximus. It’s the Colosseum. You’re about to watch a fight to the death.”*** 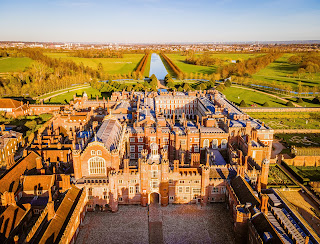 At the beginning of Spell Mason, Devin and Luca are on the run, and Devin chooses Hampton Court Palace in the early sixteenth century as a hiding place. Tudor England is one of my favourite time periods, so I was happy to have an excuse to research it in more detail! Hampton Court isn’t too far from where I live, and although the palace is much bigger today than it was five hundred years ago, I was still able to get a sense of what it must have been like. Devin makes an unlikely friend at Hampton Court who turns out to be very important near the end of the story.

Here’s a short extract from the scene when Luca gives Devin a sword fighting lesson in the main courtyard.

***We followed the corridor, until we found a door to the courtyard. It was square shaped, the surrounding brickwork creating a geometric pattern. Decorative emblems appeared at regular intervals. “It would look better with a basketball hoop,” I said.

“Yeah, and Sherbourne High lost. My reflexes need the practice.”

“Not basketball. But we could do something else.”

A weight settled against my left hip, and I looked down to see that Luca had given us both swords. “Cool,” I said, grabbing the hilt with my right hand. The blade was thin and silver-colored, reflecting the sunlight in flashes as I took a few experimental swings.

“Do you have any idea what you’re doing?” asked Luca.

“It’s not,” he protested. “I haven’t studied sword fighting since the Colosseum. Techniques might be different now.”

“Oh. Of course.” I stopped waving the sword and looked at him. He was standing with his weight perfectly balanced, sword arm in front, the other arm lowered against his side as if it were holding a shield. His muscles were tense. Ready.

“You were a gladiator,” I said. 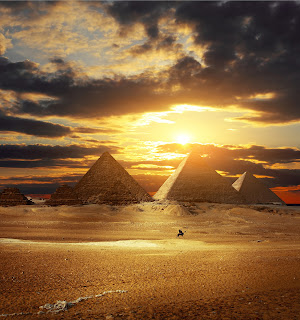 The Pyramids of Giza

The final book in the trilogy, Spell Master, reveals the origins of the earthbound dimension, and I decided to include a reference to the Seven Wonders of the World. Each of the seven High Council members was responsible for one of the Seven Wonders, and although it’s only a small part of the story, it really helped me to figure out the characters and their motivation. In this book, the magical dimensions are fighting an ancient curse, and a chamber beneath the Pyramids of Giza might hold the clue to beating it. I haven’t visited Egypt, so I had to rely on research and my imagination for this one!

Here’s a short extract from the scene when Luca and Devin discover the chamber.

***“I also want to visit the Pyramids of Giza. Now would be a good time because all the tourists will be watching the light show.”

“I hope you’re not suggesting we split up,” said Devin.

“No, of course I’m not. Besides, I might need your help. Remember what happened last time.”

He looped his arm through mine. “If you faint at my feet, Luca, I’ll try to catch you. But I’ll warn you now, you’re heavier than you look.”

“Nice to know that chivalry is alive and well,” I replied.

Devin laughed. “Pyramids of Giza,” he said, and the Greek island spun out of focus. When my vision cleared, we were standing on the north side of the Great Pyramid of Khufu. It rose above us, a massive wall of pale stone, well over four hundred feet tall, narrowing at its apex as if it were reaching to pull a star from the night sky. My magical core tightened with something like recognition. I felt a little lightheaded, but it was nowhere near as severe as what I’d experienced as Carrie Bennett.

I've never really traveled to anywhere that was based on books I've read sadly. I wish I could, when I'm older I plan to travel all over the place. My first stop would be all the M states, then to the United Kingdom where I wish to visit the ruins of Camelot. Not sure if those exist though, I hope they do. And if I could travel anywhere... probably back in time to when King Arthur was alive. My version may be very different, but I think it would be very cool or travel to Androva and meet Galen.
Sincerely, D. B. Odd

Thank you for taking the time to comment. I really hope you can make your travel plans a reality in the future. There's a place in England called Tintagel that's linked to King Arthur. I've been there a few times, and it's definitely worth a visit!