“Christmas waves a magic wand over this world, and behold, everything is softer and more beautiful.”

There is definitely something magical about this time of year because even my unsociable cat (that’s her on the left) joins in the fun! Under the Christmas tree is her favourite place to be 🎄. 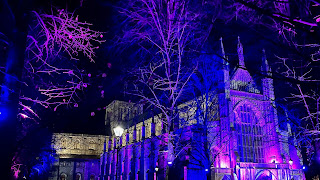 I haven’t had much time for either reading or writing lately, but I’m hoping to escape into some fictional realities over the festive season. I took this photo of Winchester Cathedral last weekend, and the purple lighting made me think of Xytovian magic and xyleander trees! I guess it’s a sign of how much I miss the characters. I’ll be able to focus on Averine and Kellan as soon as the final Light Mage story is released, and I can’t wait.

Today’s post contains three seasonal books that I’ve added to my TBR list in anticipation of the upcoming holiday. I wanted something a little different to the traditional Christmas romances this year, and I looked for snowy/icy/winter content instead of mistletoe and kisses ❄. I wish I could press the pause button on my life and keep reading them all the way to the end! So many books, so little time…

In 2017 and 2019, I wrote a couple of Christmas stories featuring the characters from the Legacy of Androva series. The first one takes place at the end of Seeking Magic, and you can find it here. The second one is an epilogue to the final book, and I posted it here.

If all goes well, I’ll be back before the end of the year with an update on Spell Master’s release. I hope you find my reading choices interesting, and thank you very much for visiting my blog today 💕. Happy Holidays and happy reading!

Wicked As You Wish, by Rin Chupeco

What if every story you'd ever heard was true? Jack killed the giants. Red slayed the wolf. Rapunzel fled the tower. But the greatest one of all, had yet to be told.

Once upon a time, the magical Kingdom of Avalon was left to wither and die after the Snow Queen encased it in ice. Its former citizens are now refugees. Which is why crown prince Alex and his protectors are stuck in... Arizona.

Tala Makiling has lived her life as an outsider. Her family curse, the one that's doomed her to be a spellbreaker, someone who destroys magic, hasn't won her too many friends. Except Alex, who trusts her and her family to keep his royal identity a secret.

And then one night, a famous creature of legend, the Firebird, appears in their tiny town, reigniting hope for their abandoned homeland. Alex and Tala team up with a ragtag group of new friends to journey back to Avalon. Their path is filled with danger—from deadly prophecies, to terrifying ice wolves, a traitor among them, and the Snow Queen herself. But if they succeed... their story would be legendary.

Magic—hurl-a-fireball-like-you’re-a-wizard-from-the-Middle-Ages magic anyway—was banned in the Royal States of America. Anyone caught using it could face steep fines, imprisonment, and even deportation. The effects of magic had been devastating during the last war, and the fear still lingered.

Spelltech, on the other hand, was legal. Spelltech was the loop-hole—a spell that was cast on an item instead of on a person was all fine and dandy. Spelltech magic had more restrictions and less variety.

But even sanctioned spells like spelltech never seemed to work in Invierno, like magic didn’t want to be caught dead here either.

“I’m Alex…” A significant pause. “Smith. I live down the street.” The boy looked down. “Probably not the first meeting you envisioned,” he added, a little miserably.

He was still trying to keep up the pretense, though Tala knew who he was. Lola Urduja and her parents had been planning Alex’s arrival for weeks. Tala had been instructed to treat the prince like she would a normal person. As if she had friendships with other nobles to compare to.

But even then, no one had told her that Alexei Tsarevich, the last remaining king of Avalon, could turn people into frogs.

She thought being stranded was the worst thing that could happen. She was wrong.

Mira needs to get home for the holidays. Badly. But when an incoming blizzard results in a canceled connecting flight, it looks like she might get stuck at the airport indefinitely.

And then Harper, Mira's glamorous seatmate from her initial flight, offers her a ride. Harper and her three friends can drop Mira off on their way home. But as they set off, Mira realizes fellow travelers are all total strangers. And every one of them is hiding something.

Soon, roads go from slippery to terrifying. People's belongings are mysteriously disappearing. Someone in the car is clearly lying, and may even be sabotaging the trip—but why? And can Mira make it home alive, or will this nightmare drive turn fatal?

“Dammit,” Harper says, her voice high and tight. “I can barely see for all that ice.”

“I can drive if you want,” Brecken says. “I learned to drive in upstate New York, so this is nothing.”

I stare out the window, pondering a lazy stream of internal questions. Is this really a blizzard? How fast are we going? Is Mom doing okay? Is someone in this car watching me?

I straighten, because it’s a strange question to pop into my mind. Stranger still is the chill that rolls up my spine, the prickle of the hairs on my arms standing on end. I look around, because it’s exactly the kind of feeling I’d get if someone was watching me.

But they aren’t. No one is paying me the least bit of attention.

The Snow-Walker's Son, by Catherine Fisher

From the swirling mists and the icy realms beyond the edge of the world came the Snow-Walker Gudrun, her sorcery bringing tyranny and fear to the Jarl's people. All hope of restoring the true Jarl to his throne seems lost.

In the first part of a trilogy of enchantment, a terrifying journey into exile takes Jessa and Thorkil to the ruined fortress of Thrasirshall. Inside, say the rumours, is a dark menace kept hidden from the world; the Snow-Walker's own son.

After an endless journey, Thorkil and Jessa arrive and, at last meet Kari. He is not as they feared but is a slight winsome young man. His only terror is that he, too, has the power. But he is determined to use the magic wisely.

The hall was empty. Jessa edged inside and began to wander idly about, pulling the thick furred collar of her coat up around her face. She was early.

It had been a bitter night. The snow had blown in under the door and spread across the floor. A pool of wine that someone had spilt under the table was frozen to a red slab. She nudged it with her foot; solid as glass. Even the spiders were dead on their webs; the thin nets shook in the draught.

She walked to the great pillar of oak that grew up through the middle of the Hall. It was heavily carved with old runes and magic signs, but over them all, obliterating them, was a newer cutting: a contorted snake that twisted itself down in white spirals. She brushed the frost off it with her gloved fingers. The snake was Gudrun’s sign. A witch’s sign.

She waited, grinding the ice to white powder under her heel.

Light gathered, slowly. Corners of tables and tapestries loomed out of the shadows; a cart rumbled by outside, and the carter’s shout echoed in the roof. Jessa kicked the frozen fire. Why hadn’t she come late—sauntered in sweetly when the Jarl was waiting, just to show him that she didn’t care, that he couldn’t order her as he wanted?

Those three sound like amazing books, but with my TBR list, it'll be a while before I get around to them. I don't even thick my TBR list has many holiday books. Anyway, I know how busy you are, but because of how you do it, I decided to take a few minutes and make a few of my own. I wrote three character interviews, I'd love it if you would read them. Sincerely D. B. Odd

I forget to mention how to get to my character interviews. They are on d-b-odd.com. At the bottom of the page, the section reads Character Interviews, in case your interested. Sincerely D. B. Odd

Thank you for commenting and sharing the link to your interviews. I enjoyed meeting your characters and seeing how you changed the interview style for each of them to show their personalities. And I liked the way the third interview ended!