Incredible Creatures from A to L

In the name of research (and fun!) I decided to create this A to Z of favourite creatures in fantasy fiction. I haven't written any books containing non-human characters yet, but who knows what will happen in the future? There's no harm in being prepared! 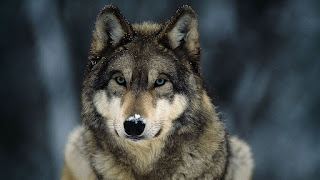 A is for Animagus
If I could break J. K. Rowling's rules on this one and actually choose my Animagus, I would like to be a wolf.
B is for Bird
Obviously Hedwig and Fawkes get an honourable mention here! I also love the Great Eagles from Lord of the Rings. But my choice is a little more obscure. There is a talking bird, a starling, quite an obnoxious one in fact, in Mary Poppins by P. L. Travers. I’ve never forgotten him, even though I read the book a long time ago. He appears in a chapter devoted to the baby twins of the Banks family. As the twins, John and Barbara, turn one, they lose the ability to communicate with this bird, and he cries, even though Mary Poppins mocks him for it. It made me wonder what I had forgotten as part of growing up, even though I was still quite young at the time.
C is for Canine
I choose Roald Dahl’s Fantastic Mr Fox, for getting the better of farmers Boggis, Bunce and Bean and for taking self-confidence to new heights! “I understand what you’re saying, and your comments are valuable, but I’m gonna ignore your advice.”

D is for Dragon
There are a lot of amazing dragons out there, but I eventually settled on Saphira from Christopher Paolini’s Eragon. I think what made up my mind was the chance of being a dragon rider, even if only in my imagination!
E is for Ensemble Cast
Watership Down by Richard Adams. 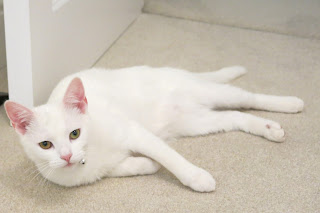 F is for Feline
Talking cats in fantasy books can be portrayed in different ways. There are the wise and noble characters (Aslan, Bagheera) and then there are the more stereotypical, superior cats looking down on the rest of us. I choose the cat in Neil Gaiman’s Coraline, for telling it like it is: “Now, you people have names. That’s because you don’t know who you are. We know who we are, so we don’t need names.”
I suppose that’s the reason my cat (see photo) always ignores me when I call her ☺
G is for Giggle
Which character has made you laugh the most? My choice is the djinni Bartimaeus, created by Jonathan Stroud. Some of the footnotes in the Bartimaeus trilogy are very funny. “Well, he wasn’t going to do our morale much good with that kind of talk.” (footnote: i.e. accurate). 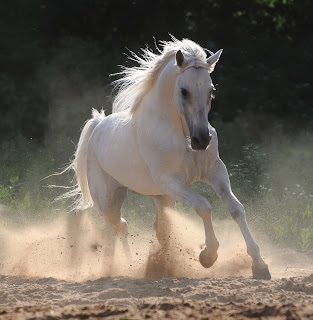 H is for Horse
Shadowfax from Tolkein’s Lord of the Rings.
I is for Idea
Seraphina by Rachel Hartman wins for me in terms of most original story/creature idea. In this book there’s a treaty between humans and dragons—who by the way are very intelligent and can fold themselves into human form—plus the heroine is half-human and half-dragon (considered to be an abomination) and the heir to the human kingdom has just been killed, apparently by a dragon…! It’s brilliant, isn’t it?
J is for Jerk
Bear with me on this one… by ‘jerk’ I mean the kind of character who is snarky/ annoying/ untrustworthy, but there are also glimmers of redeeming behaviour underneath it all. Or they’re just funny. Or both. Either way, you end up having a soft spot for them. I choose Puck, from The Sisters Grimm series by Michael Buckley. “Maybe one of the monsters ate him,” Daphne whimpered. “That would be awesome,” Puck said. Sabrina flashed him an angry look. “Awesome in a terrible, heartbreakingly tragic way,” Puck continued.
K is for Kingdom
For nostalgic reasons Narnia is my favourite. Some day, you will be old enough to start reading fairy tales again, C. S. Lewis.
L is for Loyal
Atreyu and Falkor the Luckdragon from Michael Ende’s The Neverending Story. They are kind of a double act in the book, particularly in the way they speak for Bastian at the end.
“Everything will turn out all right. You'll see.”
“I can't imagine how,” said Atreyu.
“Neither can I,” said the luckdragon. “But that's the best part of it.”

What Atreyu says is a lot like me when I sit down to write! I hope you enjoyed the first half of the list, and thank you for reading. What would your choices be?