Ancient Woodland 🌳: What If? 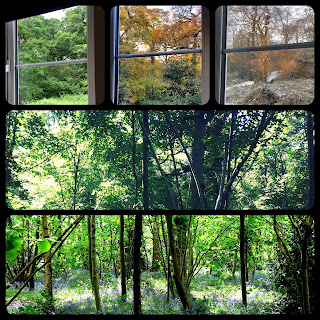 I moved house just before I wrote Stealing Magic, and although I live at the end of an ordinary suburban street, there is an amazing area of ancient woodland practically on my doorstep. The woods have survived until now because they belonged to the local university, and the land was never sold off for housing or development.

In terms of my weekend writing it's a mixed blessing as the view from my desk can be kind of distracting! However, it's also inspiring to overlook something with so much history. Ancient woodland is defined as having existed continuously since before the year 1600. Why 1600? Apparently, before then, deliberate planting of woodland in the UK was very rare. Therefore anything older than 1600 was created by nature rather than human beings and had likely been around for a long time already.

Most ancient woodland is much older than a mere four hundred years. For example, Sherwood Forest, home of the legendary Robin Hood, has been dated back to the Ice Age more than ten thousand years ago! I often look out of my window and wonder what I'd see if I were able to go back in time. Here's my top three:

(1) King Henry VIII might have led the royal hunt through those same woods. He was supposed to have stayed near to where I live during his summer progress in 1509, and at that time in history most English woodland was under royal ownership. He'd just become king, and was only eighteen years old. Henry must have felt as if the future were his for the taking. He didn't know he would eventually marry six times and break with the Catholic Church in a desperate quest for male heirs.

(2) It was probably inhabited by wolves. Wolves have been extinct in England for hundreds of years but once roamed free in its forests. However, it's doubtful Henry VIII would have encountered any wolves on the royal hunt—they were supposed to have died out completely during his father's reign due to a combination of being aggressively hunted and the reducing number of forests. In the dead of night, the foxes and owls who live in the woods can be pretty noisy. I sometimes wonder how quickly they'd shut up if they were ever interrupted by the howl of a wolf 🐺.

(3) Poachers could have hidden there, on the run from the law. If they were found to have killed the king's deer, their fate would have been death by hanging—reason enough for the poacher to be terrified. All thanks to William the Conqueror, who made it illegal in the eleventh century for commoners to hunt in "his" forests. But often the unhappy choice was poaching or death by starvation.

The way I see it, the woods are a piece of living history and, on balance, I think the distraction is worth the view. When we first meet Jax and Darius in Stealing Magic, they are magic-takers, according to the terms of a long-ago treaty between their world, Androva, and ours. They open portals in the dead of night to harvest from the endless supplies of living magic in our trees. I am sometimes asked where the idea for living magic came from. I suppose today's blog post is the answer! Thank you for reading 😊