Pompeii: The Weird and Wonderful

I like mixing a little history in amongst the magic/spells/alternative worlds when I'm writing ⚔🛡. The research is fun, as is figuring out a way for my characters to have their adventures without changing any of that history.

In Seeking Magic, the third book in the Legacy of Androva series, Jax and Shannon go back in time to Pompeii. It turns out that the way home is not as straightforward as they thought, and of course Mount Vesuvius is about to erupt...
In my new Light Mage series, there will be some history too, but it's not so much time travel as it is past life memories.

For today's post, I thought I would share three details that I found interesting from my research into Pompeii, combined with pictures of three places that Jax and Shannon visited. 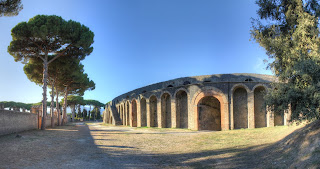 Pompeii's amphitheatre is even older than the Colosseum in Rome, and emotions at the games ran pretty high. Emperor Nero actually closed it down for 10 years in 59 AD. A small disagreement between the residents of Pompeii and Nuceria escalated into a riot of such epic proportions that swords were drawn, and many people were killed.

Detail 1: Graffiti was uncovered in Pompeii about a particular gladiator, with the words 'Celadus, suspirium puellarum,' which means (polite translation!) 'Celadus makes the girls sigh!' 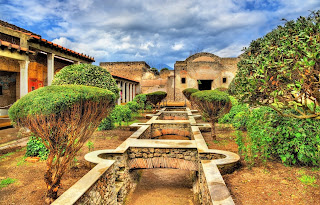 These are the formal gardens of Villa Julia Felix, thought to be laid out to resemble the Canopus canal in Egypt. The central pool would have been topped up with fresh water daily.

Pompeii had an aqueduct that supplied the city's drinking fountains and public baths with fresh water. Detail 2: Private houses used the water to supply their gardens, not their kitchen or bathroom facilities. Strange way to prioritise! 🤔

The Temple of Apollo has an amazing 48 columns, and is one of the oldest temples in Pompeii. It dates back to the 6th century BC. Apollo was a Roman god who mainly represented the sun, but also medicine, prophecy, archery and music.

Detail 3: The laurel wreath is said to date from Apollo's Pythian Games. Apollo insulted Eros, the god of love, who got his revenge by making Apollo fall in love with a woman who would never love him back. Eros shot Apollo with an arrow of gold, and Daphne, a beautiful nymph, with an arrow of iron.

Daphne's father, a river god, helped her to escape Apollo by turning her into a laurel tree. Apollo vowed to love her forever, wearing laurel leaves in his hair, and making the tree evergreen. It's interesting that the laurel wreath is still around today as a symbol of victory!

Thank you for reading, and I hope you enjoyed the mini history lesson!