Stealing Magic, Book 1 in the Legacy of Androva Series 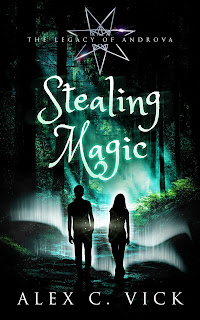 Jax is a fourteen-year-old magic-taker from Androva. He's also a rule breaker. He should not have opened a portal to our world in daylight, no matter how fed up he was with the rules, or how interested he was in Shannon.

Shannon considers herself to be ordinary. She loves escaping into fantasy books, but she never actually believed in magic. Not until the day she opens her eyes to find herself surrounded by it. And that boy, the one with the green eyes, who winks at her before he disappears into thin air. Who is he? Where does he come from?

When Shannon first touches the silver force field created by Jax, a treaty is broken, giving an ancient enemy the chance to regain his power. The two teenagers don't have much time to figure out what is going on, and they're going to need all of their combined magical ability to stand a chance of surviving.


The next ten days will be the most exciting and terrifying of their lives (so far!).

Capturing Magic, Book 2 in the Legacy of Androva Series 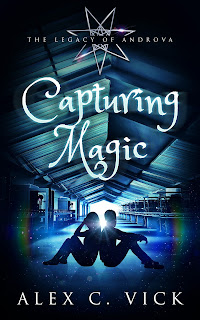 It's your average new school nightmare. Classes you've never taken, teachers you've never met before. Having to pass a really difficult entrance exam. Oh, and upsetting the most popular girl in the school before you've even arrived.

Except this school is the Seminary of Magic on Androva. A world Shannon only discovered a few weeks ago. She's a brand-new magician, with a brand-new boyfriend, and unfortunately she's about to discover a brand new enemy, who will stop at nothing to get their hands on some magic.

But how does she know whom she can trust? If she gets it wrong, she might end up paying with her life...

Jax and Shannon are back, and things are getting complicated!

Seeking Magic, Book 3 in the Legacy of Androva Series 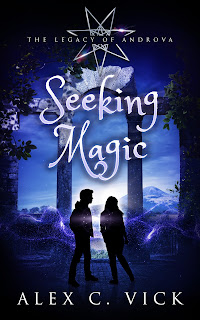 How far would you go to find an explanation if you were still the only magician in the entire world, and no-one knew why? You could try reading some ancient history books. That’s pretty harmless, at least to start off with.

Or you could experiment with some brand new spells. That’s a bit more risky, but still nothing you can’t handle.

Or maybe you could go back in time two thousand years to question the one magician who might have the answer? That’s dangerous by anyone’s standards. You might get stuck there. You might die there. Or you might discover that you never become a magician at all…
Jax and Shannon return in another exciting adventure, where nothing is as it seems, and the past could be rewritten in a heartbeat.

Controlling Magic, Book 4 in the Legacy of Androva Series 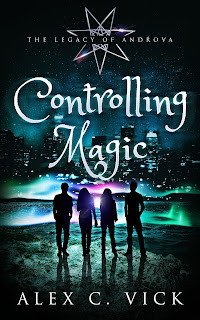 Far away, on a world of rock and water, live a brother and sister. They have a special talent. So special that, when applied correctly, it enables them to live forever. Androva hasn't visited this world since before the Treaty. It was so horrified by what it found there, it closed the portals and never went back.

Breaking Magic, Book 5 in the Legacy of Androva Series 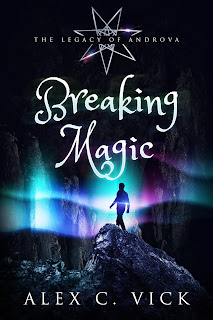 But in protecting his younger brother Benedar, he was noticed by the Breaker, the evil magician in charge of the Gathering. The closer Callax gets to the ruling house and the girl who lives there, the more he learns, and the greater the danger. A danger he might not understand until it is too late. Callax thinks the Breaker's defeat will save him, but he is wrong.

Surviving Magic, Book 6 in the Legacy of Androva Series 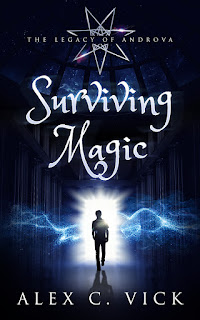 My name is Galen and I never wanted to know the future. Life as an underage magician on Androva was already complicated. Using illegal spells on professors, opening portals to strange new worlds, and trying to avoid being matched with the wrong girl.


Then I found the right girl and everything changed. I made some choices I can’t take back. I opened a doorway in time and now I know that a great evil is coming. I’m nearly seventeen and I’m a pretty good magician, but that won’t be nearly enough. No one on Androva will believe me – the runaway who chose love instead of duty. If I get this wrong, there’s a lot more than my own life at risk…
Although Surviving Magic is part of the Legacy of Androva series, it can also be read independently. However, if you have read Seeking Magic and want to know more about Galen, Surviving Magic is his story. The book retells part of Seeking Magic from Galen’s point of view.

Connecting Magic, Book 7 in the Legacy of Androva Series 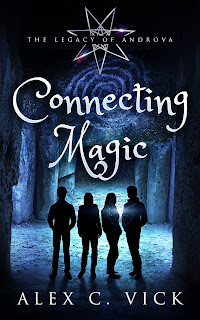 Shannon, Jax, Darius, and Penny are underage magicians from different worlds. They have defeated the worst of villains and forged a bond that will last for the rest of their lives. But there’s no happy ever after yet. In fact, death might be waiting right around the corner, and they have no idea just how fast the clock is ticking.

Problem one: A magical contract, created when Jax and Shannon first met, has recently been triggered, and its life-threatening consequences appear to be unavoidable.
Problem two: Magic obeys the magician. It has no conscience. No filter for good or evil. And Darius is about to demonstrate that a good magician is more than capable of using evil magic.

With Jax and Shannon distracted by the first problem, Penny may not survive the second. Whatever happens, one of the four will face certain death before the end...

Matched in Magic, Book 1 in the Beyond Androva Series 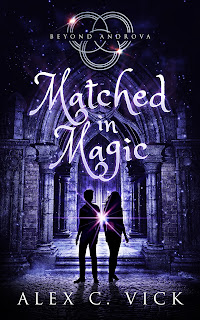 Serena is a sixteen-year-old magician in search of a new life. She doesn’t know what to expect from the world on the other side of the portal, but she’s certain it will be better than what she’s leaving behind.

Art is sixteen too. He’ll never have any magic of his own. His unmatched status forbids it. The threat of mage-sickness on his world means that everyone follows the rules.

Engraved in Magic, Book 2 in the Beyond Androva Series 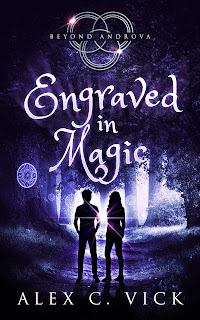 An ancient criminal. A deadly trade.
Every life has a price.

Art's fourth day as a magician isn't going very well. Returning to Xytovia to face the consequences of his actions was always going to be a challenge. But getting lost in an enchanted wood and accidentally opening a Dimension Cell creates a complication he and Serena didn't expect.

Inside the cell is a seventeen-year-old prisoner who says he's from a different Xytovia. A Xytovia before the war and before mage-sickness. He also makes an extraordinary claim about Art's magic. One that will change Art's life forever if it's true.

The subsequent upheaval catches the attention of a new enemy whose interest in Art's magic goes far beyond curiosity. While Art and Serena are distracted by their attempts to abolish Xytovia's Bonding Spell, they don't realise the danger. They're up against a unique and deadly skill set, and time is running out...
Amazon UK Engraved in Magic
Amazon US Engraved in Magic

Lost in Magic, Book 3 in the Beyond Androva Series 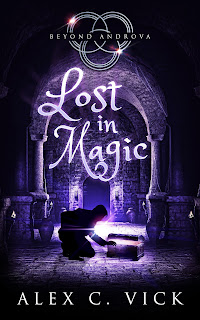 Magic, mystery, and murder.
Second chances can be complicated.

Kellan is a seventeen-year-old magician who just escaped from prison. After almost two centuries in a Dimension Cell, reliving the same day over and over with only his nightmares for company, he emerges into a very different world from the one he remembers. War, mage-sickness, and a mandatory Bonding Spell have transformed Xytovia.

His rescuers, Art and Serena, are trying to put things right, but their actions are not welcomed by everyone. At first, Kellan's only allegiance is to himself. He's not interested in making friends, much less risking his life for them. Then he stumbles across a cry for help from the past, and he's drawn into a conspiracy that quickly becomes very personal and very life threatening.

Kellan thoughts his problems were over when he was released from the Dimension Cell. It turns out they were only beginning... 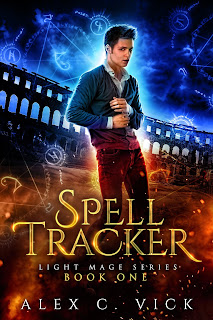 Luca has a problem his magic can’t solve. The boy he’s loved since they fought side-by-side as gladiators in Ancient Rome is about to die for the last time. Luca’s only chance to prevent it is to make a deal with the Spell Tracker, who demands Luca’s own life as collateral.

At seventeen years old, Luca is a Light Mage, the rarest of magicians. He’s able to navigate the earthbound dimension without losing his memory of its magical counterpart. Like an invisible kind-hearted ghost, he helps others to graduate their life paths and take up their chosen magical professions.

But this time, with the help of the Spell Tracker, Luca is earthbound again for real as a high school senior. The boy he’s here to save is nothing like he expected, and before long his head and his heart are all over the place, as well as his intended rescue.

The Spell Tracker can hardly wait for him to fail. The life of this particular Light Mage is something he’s wanted for a very long time…

Spell Tracker, the first book in the Light Mage series, is a contemporary fantasy story with time travel, m/m romance, and no cliffhanger. Additional content information will be available via the Look Inside feature. Recommended for 14+ 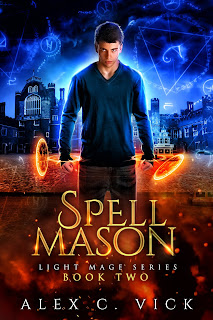 Spell Mason, the second book in the Light Mage series, is a contemporary fantasy story with time travel, m/m romance, and no cliffhanger. Additional content information will be available via the Look Inside feature. Recommended for 14+